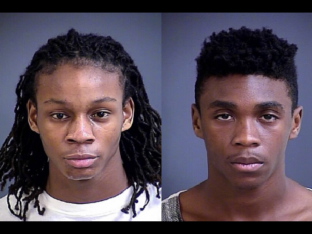 Police in North Charleston, SC say two teens repaid a good samaritan who helped them pull their car out a ditch by robbing and killing the man.

Investigators told reporters that officers responded to reports of gunshots around 11:00 PM Monday night in North Charleston and found 45-year-old Chadwick Garrett dead at the scene.

A woman who lives near the scene told WCSC, “I heard about three gunshots because I was sitting down getting ready to eat, I thought it was firecrackers. It’s dirty, evil.”

Investigators say they are still attempting to understand why Garrett was robbed and killed.

According to the Post and Courier, Frasier and Dupree-Tyler both have a history of run-ins with police.  Frasier has pending charges related to the possession of a stolen vehicle and he was reportedly out of jail on bail at the time of the alleged murder.  The newspaper’s review of State Law Enforcement Division records did not reveal any information on Dupree-Taylor, but Charleston County jail records show the 19-year-old had been booked into jail at least eight times since July 2014.

Both suspects are expected to appear in court on Tuesday for a bond hearing.