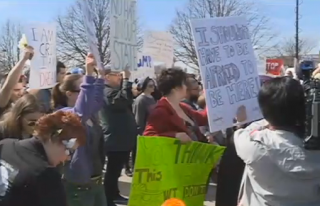 A 15-year-old girl was allegedly assaulted while protesting outside a Donald Trump rally in Wisconsin on Tuesday, the New York Daily News reported. Janesville Police Chief David Moore told WKOW that a man touched the girl while she was standing in line for the event. She turned around and shoved him, at which point a second individual sprayed her in the face with an orange pepper spray.

The teenager ran through the crowd while the man who allegedly groped her laughed to another Trump supporter, the Daily News said. Police eventually made their way through the crowd to help her, but only after they escorted other protesters out of the crowd. As of Tuesday, authorities were still looking for the suspects.

Moore said that besides this, and a couple of suspicious packages and a parked car that turned out to be harmless, both the rally and protest were peaceful.