Republican Senator Meets With Supreme Court Nominee, Slams His Party for Being ‘Closed-Minded’ 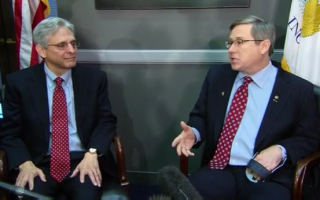 While the majority of Senate Republicans insist on boycotting any Supreme Court nomination until the next President takes office, Mark Kirk broke ranks to meet with nominee Merrick Garland on Tuesday. “I think we should do our job,” the Illinois Senator declared.

Kirk said he is “leading by example” in calling for “rational, adult, open-minded consideration of the constitutional process.”

“I think when you just say ‘I’m not going to meet with them’…it’s too closed-minded,” he added. Kirk also indicated that there are 15 or 16 Republicans who plan on meeting with Garland.