Pastor: Those Who Don’t Stand for Anthem Should Let Military ‘Take a Few Shots’ at Them 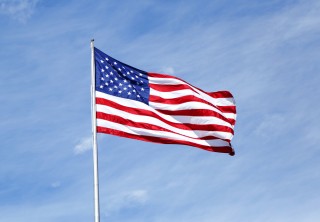 Pastor Allen Joyner of Sweet Home Baptist Church in McKenzie, Alabama was the announcer at a high school football game Friday night, and he had some choice words for anyone who might not want to stand for the national anthem.

A Facebook post by someone in attendance (which does not appear to be publicly viewable, but was shared by AL.com) quoted the announcement:

If you don’t want to stand for the national anthem, you can line up over there by the fence and let our military personnel take a few shots at you since they’re taking shots for you. 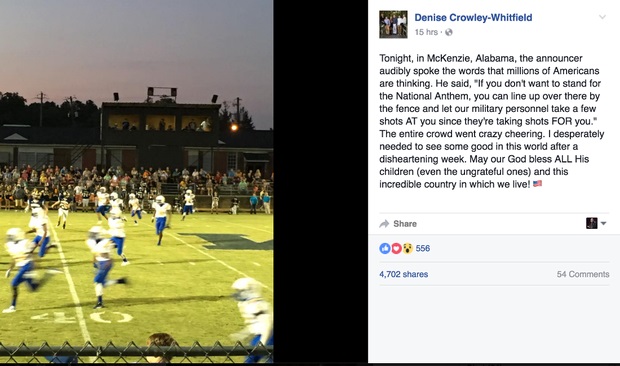 The writer of the post, Denise Crowley-Whitfield, said that the crowd cheered after the announcement, but the school’s superintendent, Amy Bryan, did not approve. “Patriotism should be a part of school events but threats of shooting people who aren’t patriotic, even in jest, have no place at a school,” Bryan said in an email to AL.com.

The church said in a Facebook post that has since been deleted, “We stand by our pastor and are proud of him.” The post said that Pastor Joyner’s remarks were “taken out of context and misquoted.”

Update 9/13/16 2:37pm: Pastor Joyner addressed the situation in an email to Superintendent Bryan. He said he was misquoted in the Facebook post.

The dear lady who posted the comment on Facebook was paying our school a compliment. I never said anybody should be shot. My words were ‘if you don’t want to stand for the national anthem, please go sit at the baseball field and let some of our folks take a shot at reminding you of the price our military paid for your freedom to sit.’ I never advocated violence of any kind … just an opportunity to educate.

Joyner also said that he has stepped down as announcer — a role he assumed as a volunteer — saying, “I realize I overstepped my authority as PA announcer to express my patriotic views.” Nevertheless, he maintains that his comment was calling for any sort of violence. “As a Christian, I would never support unlawful acts of any kind, much less murder.”

[Image of flag via Shutterstock]