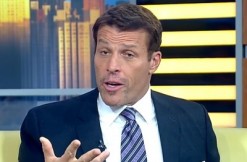 More than 30 people were treated for burns at a firewalking event hosted by motivational speaker Tony Robbins, according to The Associated Press.

“Apparently, as part of a motivational event being held at the location, several people attempted to walk across hot coals,” Dallas Fire-Rescue spokesperson Jason Evans told CBS DFW. “As a result, a large number of these people sustained burn injuries to their feet and lower extremities.”

He told the AP five people were taken to a hospital, while the rest were treated on-site by emergency personnel.

This was all part of a four-day seminar, “Unleash the Power Within.” According to Robbins’ site, it helps attendees break through limitations hindering their lives. And yep, the first day involves walking on hot coals.

“Storm across a bed of hot coals,” said a description of the event. “Once you start doing what you thought was impossible, you’ll conquer the other fires of your life with ease.”

But what’s the liability potential in a case like this?

Richard Weaver, an attorney at the Weaver Injury Law Firm in Texas, told LawNewz.com that a successful lawsuit probably wouldn’t happen “unless it becomes clear they acted well below the standard of care for that kind of event.” For example, a hypothetical plaintiff must prove a safety adviser at the site was somehow negligent.

LawNewz.com reached out to a Robbins spokesperson, who said they got all the necessary permits from the city of Dallas, and firewalking participants also signed a waiver.

“The fire walk is a completely optional activity,” the spokesperson said.

In 2012, 21 people were reportedly burned at another firewalking event in San Jose, California. A fire official said, according to The New York Times, that many received second- or third-degree burns. Robbins and his team disputed media reports, citing a Fox News retraction that stated there were no reported third-degree burns. At the time, San Jose police official told The Times that no criminal charges were expected to be filed.

Over 6,000 reportedly participated in that event, but relatively few burns were reported.
–