One of the Companies Named in Avenatti’s Report Has Been on Mueller’s Radar Since at Least Nov. 2017

Stormy Daniels‘ attorney Michael Avenatti grabbed the news cycle by the horns on Tuesday with the release of an “executive summary” (the source of which remains unknown). He alleged that the shell company Essential Consultants, LLC  is “exclusively owned and controlled by Mr. [Michael] Cohen,” was used to pay off Daniels and received payments from multiple companies.

Well, now we know that at least one of these companies has been on Special Counsel Robert Mueller‘s radar since at least November 2017. How do we know? Novartis said so.

BREAKING: Novartis — one of the companies that paid Michael Cohen's company last year — says it was contacted by Mueller's office in Nov. 2017. Novartis "cooperated fully" and provided information to the special counsel's office. pic.twitter.com/GpvRw5UdY7

Here’s the line of the Novartis statement pertaining to Mueller cooperation:

“Novartis was connected in November 2017 by lawyers from the Social Counsel’s office and provided all the information requested,” it said. “Novartis considers this matter closed to itself and is not aware of any outstanding questions regarding the agreement.”

Other companies named in the Avenatti report, for example, AT&T and Columbus Nova, have not contested that payments were made to Essential Consultants, LLC.

Law&Crime reached out to AT&T for comment and it replied, that it hired Essential Consultants to “provide insights into understanding” the Trump Administration.

“Essential Consultants was one of several firms we engaged in early 2017 to provide insights into understanding the new administration,” AT&T said. “They did no legal or lobbying work for us, and the contract ended in December 2017.”

Law&Crime also asked whether Mueller contacted them as he did Novartis and whether AT&T cooperated with his investigation. AT&T said, “Per your question on Mueller, we are not providing comment.”

AT&T confirmed a hire of Cohen’s firm occurred in early 2017 to “provide insights” into understanding the Trump Administration. AT&T, hours later, would say Mueller contacted them in Nov. 2017.

“When we were contacted by the Special Counsel’s office regarding Michael Cohen, we cooperated fully, providing all information requested in November and December of 2017,” they said in a statement. “A few weeks later, our consulting contract with Cohen expired at the end of the year. Since then, we have received no additional questions from the Special Counsel’s office and consider the matter closed.”

Law&Crime contacted Columbus Nova and asked the same questions about Mueller. We were redirected to the statement currently displayed prominently on its website. 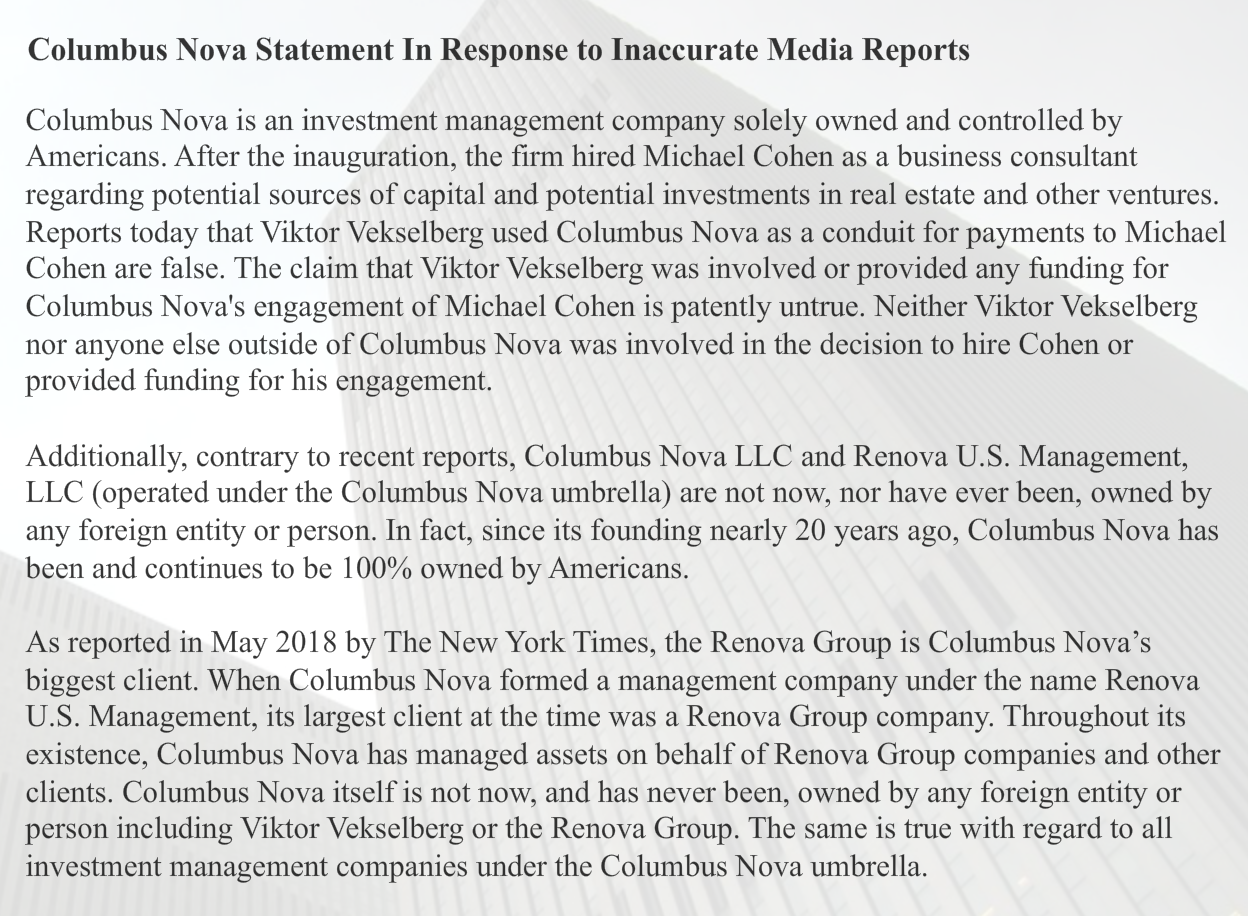 According to Reuters, Korea Aerospace Industries has said that it paid $150,000 to Cohen’s firm for consulting advice on accounting matters.

Avenatti took to Twitter on Wednesday morning and had this to say about Cohen: “Who knew Mr. Cohen was such a brilliant renaissance man?”

Priceless = Watching all of the companies that sent money to the LLC slush fund come up with different alleged reasons for hiring Mr. Cohen – “accounting advice,” “real estate consulting,” “insight,” etc. Who knew Mr. Cohen was such a brilliant renaissance man? #nonsense #basta

Aaron Keller contributed to this report.

Editor’s note: the story was updated after publication with responses to requests for comment, Korea Aerospace Industries’ statement, and AT&T’s Mueller cooperation statement.