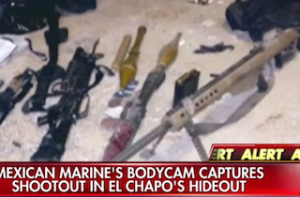 In 2009, a program was started by President Barack Obama that allowed gun buyers to take weapons across the border from Arizona into Mexico. These weapons were coded by the United States government in an attempt to trace their paths. Known as “Fast & Furious,” the program was seen largely as a failure when investigators and whistleblowers uncovered little effort on the part of the government to follow up on the weapons they allowed suspected criminals to take. After it was discovered that U.S. Border Patrol officer Brian Terry was killed using a Fast & Furious gun, the program caused somewhat of a media firestorm in 2011.

The firestorm has continued into 2016, as weapons from the program continue to pop up in crime scenes around Mexico. Most recently — and perhaps now most notably — a .50-caliber rifle that originated from Fast & Furious was found in the stockpile within the home where escaped cartel leader El Chapo was hiding out.

According to Fox News, .50-caliber rifles are able to stop a car or take down a helicopter. Out of the 2,000 weapons sold to gang members by U.S. officials through the program, experts estimate that 34 were .50-caliber rifles. El Chapo had two in his possession, though only one was traced back to the United States government.