‘Making a Murderer’ Deputy Goes Off on Reporter 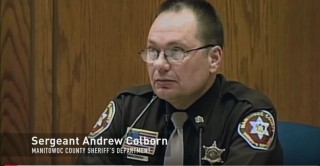 Lt. Andrew Colborn—who is not painted in the, uh, most favorable light in Netflix’s Making a Murderer—is finally firing back. But it’s not at the documentarians. He’s, let’s just say, very upset at a local news reporter, John Ferak, for writing a story about the current whereabouts of the main players in the case, including info about where another deputy lived. He even said in the email that if Avery is ever freed, “he may just become your neighbor, and he may want to bring his nephew with him.”

He sent the email to the Green Bay Press Gazette:

I hope you are proud of the fact that you felt it was necessary to publish private information about Mr. (James) Lenk’s residence, as he is now a citizen in poor health trying to live a quiet life away from this media circus. You should be ashamed of yourself…

I know the truth doesn’t sell newspapers as much as lies and controversy, but for once try thinking about the consequences of the slander and defamation that you are authoring and participating in. A word of caution, be careful what you wish for. If Steven Avery is ever freed, he may just become your neighbor, and he may want to bring his nephew with him

Wow. Just wow. You might recall that during the documentary, Steven Avery’s lawyers were pretty rough on Lt. Colborn (who wrote the email). His attorneys suggest that Colborn, and Lt. Lenk planted evidence in order to get a conviction. Avery, along with his nephew, Brendan Dassey, were convicted for the 2005 murder of freelance photojournalist, Teresa Halbach.