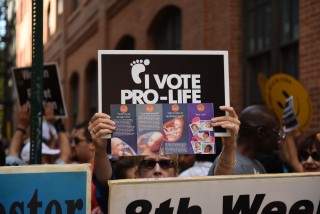 Those Southern legislatures are at it again. This time, they’re using their powers of blindness to precedent and ignorance of reality to get everyone riled up about abortion. Earlier this week, Oklahoma passed a bill making it a crime for any doctor to perform any abortion at any time during pregnancy with the one exception of an abortion necessary to save the life of a pregnant woman. Doctors who break this law face felony charges and prison time.

As planned, this bill has sparked off countless debates about the morality of abortion, the definition of “life” and all the emotionally-charged, exhausting rhetoric that goes with it. Frankly, none of that interests me nearly as much as Oklahoma’s utter abuse of the legal system does.

People have all sorts of different opinions about the concept of abortion, informed by religion, morality, family history, science, personal experience and sociological research. Americans will never share a unified voice on this subject, no matter how much yelling supporters and protesters do on television. And legal issues involving pregnancy will always be complex, just as will legal issues about parenting. Most of the time, laws must take into account two entities: the individual and society. But with laws involving pregnancy or children, that number goes up to three: the parent/potential parent, the child (born or unborn), and society. Such a reality requires a level of sensitivity, compromise, and thoughtfulness atypical of politicians who live and die by the sound bite.

When the Supreme Court wrestled with the question of abortion back in 1973, it did America proud in its commitment to creating an appropriately compound solution to a complex and difficult question. Roe v. Wade asked the question, “is it permissible for a state to outlaw abortion?” The Supreme Court might have answered, “Yes, because…” (as pro-lifers had hoped) or “no, because…” (as advocates for choice had hoped). But instead, the Court wisely responded, “sometimes.” The Roe court went on to divide pregnancy into three legal time periods that correspond with the three medical ones. During the first trimester, a woman’s rights are paramount, and the state may not restrict her right to have an abortion. During the third trimester, a fetus’ rights take priority, and the state may restrict and even prohibit abortion. During the middle trimester, things are murky. States may regulate abortion, so long as those regulations are related to the woman’s health, and so long as those regulations don’t prohibit abortion altogether. The Constitutional limits of permissible “regulation” were refined in subsequent cases (most notably, Planned Parenthood v. Casey) but the underlying framework of the Roe decision endures.

And Oklahoma knows that.

But, as seems to be the Southern custom, Oklahoma is just going to ignore SCOTUS precedent and Constitutional mandates, and do what it wants. And that is the part that really irks me. The strategy of elected officials to ignore the law in the name of what they wish were the law is grossly improper. Oklahoma’s law prohibits abortion during all three trimesters. That’s illegal under Roe v. Wade. End of story.

I’m bracing myself for the whiny and ridiculous arguments that the Oklahoma law doesn’t conflict with Roe, because it’s about the doctors and not about the women. That’s the pro-life rhetoric du jour: “abortion laws protect women.”   Bulls***.  Abortion laws like these prevent abortions.  That’s the point.   And it’s perfectly reasonable for people to want to prevent abortions. It’s just not legal to actually legislate to do so.

Next up on the obnoxious argument list will be, “this law may violate the rule in Roe, but Roe shouldn’t even be the law anyway.”

Talk about some selfishness. Oklahoma already has wide latitude for regulating abortion to make it safe. But like the brat that grabs at another kid’s birthday gift, Oklahoma only cares about what it wants and what will serve its needs. Its legislators have seized on the righteous indignation that will get them elected to another term. In coup of political expediency, they will lead the charge to ignore the Constitution and disavow the authority of the Supreme Court, propelled by pro-life momentum.

Oklahoma missed the Civil War, but its self-centered refusal to acknowledge the obligation to abide by federal law smacks of the Confederacy. And that imprudent stubbornness is just the preamble to the much larger plan at work. Oklahoma and its allies will force the rest of the nation to waste our time debating this bad legislation as a way of illustrating the high stakes of the November election. The message will be clear: “if we get our guy in the White House, then he’ll appoint our guy to the Court, and then we’ll get to change everything to go our way.”

That mindset is deeply dangerous. Sure, there are times when SCOTUS has overruled itself – primarily in cases in which legal attitudes have evolved to warrant a change in law. But generally, the concept of stare decisis (respecting and following precedent) is a fundamental one. Manipulating the political process for the sole purpose of getting another crack at a controversial issue is wrong. Oklahoma is using the issue of abortion to hijack our election and our Supreme Court. Not for the first time, that hijack isn’t about the group Oklahoma is purporting to protect; this is no more about unborn children than it is about women. This is about power, and about using a sensitive personal issue to erode the authority of our legal system.

Mature adults understand the necessity of rules and compromises. No successful group has survived by encouraging its members to unilaterally flout a system that was carefully and objectively crafted. Roe v. Wade gave a divided United States a reliable and reasonable precedent to govern a divisive and thorny issue; Oklahoma’s abortion legislation spits in the face not only of the Supreme Court, but more importantly, of the judicial process.