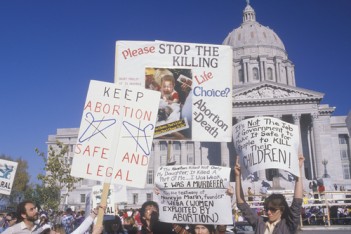 The Oklahoma senate passed an abortion bill on Thursday that makes it a felony for doctors to perform most abortions in the state.  Governor Mary Fallin now has five days to sign or veto the bill before it automatically becomes law.

Critics say the first of its kind bill is unconstitutional as it essentially acts as a ban on abortions in the state.  Several groups have already promised to challenge the matter in court.

“This total ban on abortion is a new low. When abortion is illegal, women and their health, futures, and families suffer,” Amanda Allen, a lawyer at the Center for Reproductive Rights, wrote in a statement obtained by The Hill.

The bill passed the state senate by a vote of 33-12 on Thursday, according to the Associated Press. The State House of Representatives passed the bill in April.

“Most people know I am for defending rights,” Sen. Nathan Dahm, the bill sponsor, told NewsOK.com. “Those rights begin at conception.”