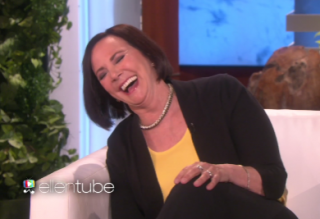 This time it was the prosecutor in the hot seat. Marcia Clark, the attorney who became famous during the O.J. Simpson trial in the 90s, appeared as a guest on The Ellen DeGeneres Show on Thursday. Ellen started of by lobbing some softball questions about The People vs. O.J. Simpson, the hit television show on FX. Then, she dove right into the juicy stuff. Ellen said the series made it look  like Clark’s co-counsel Christopher Darden had a big, big cruch on her. Ellen asked if that was the case, and Clark expertly dodged by saying “It didn’t seem that way to me.”

Ellen was done playing games, and flat-out asked, “Did y’all make out?” Clark giggled without respondng yes or no. DeGeneres pretty much badgered the witness, asking the question again and again. Clark gave non-answers like “We danced,” and “We did take a trip to the Bay Area.”

Looks like she’s pleading the fifth on this one.