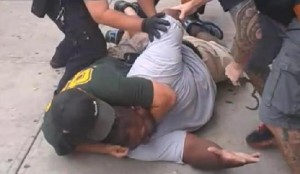 Eric Garner died in 2014 after a NYPD officer, Daniel Pantaleo, wrapped him in a chokehold. The NYPD disciplined no one for his death until now.

Sgt. Kizzy Adonis was knocked down to modified duty Friday. She was the supervising officer at the scene of the chokehold. Officials said she was charged with failing to supervise correctly.

In 2015, a grand jury chose not to indict Pantaleo, a white officer. Garner was black.
Pantaleo hasn’t faced departmental charges.

Garner’s death and the grand jury decision sparked outrage and protests. Activists coined the chant, “I can’t breathe,” based on Garner’s words in his videotaped death.