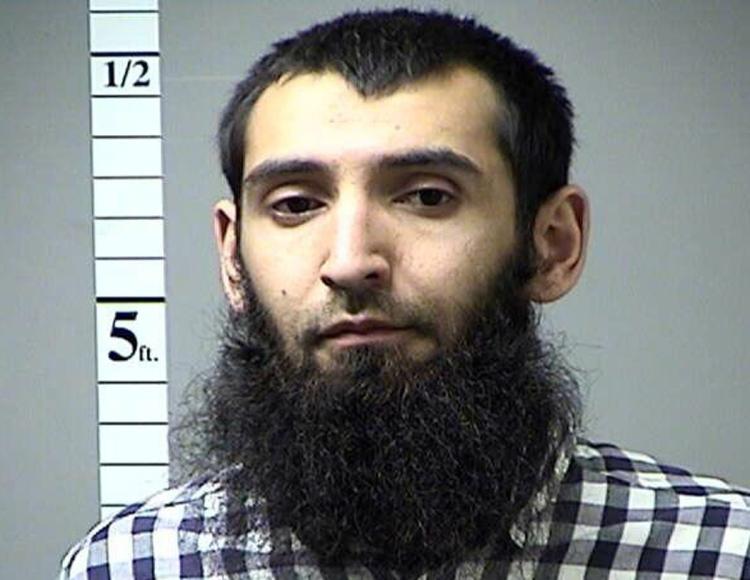 NEW YORK (AP) — The Latest on the truck attack on a bike path near the World Trade Center (all times local):

Federal prosecutors have charged a Uzbek immigrant with a terrorism charge related to the deadly truck attack on a New York bike path.

Suspected Sayfullo Saipov was charged Wednesday in a criminal complaint in the Tuesday afternoon attack that killed eight people near the World Trade Center.

The complaint says he drove the truck down the bike lane intentionally. Investigators say they recovered a cellphone that had Islamic State group propaganda.

A court proceeding is scheduled in federal court. It’s unclear whether the man will appear. He was shot by police and hospitalized.

A family friend with whom the man stayed in Ohio has told The Cincinnati Enquirer he was “really calm” and worked hard.

The White House says President Donald Trump has spoken with the New York City mayor and the New York governor following the deadly truck attack on a bike path near the World Trade Center.

White House spokeswoman Sarah Huckabee Sanders also says Trump’s calls for increasing extreme vetting of immigrants are “something that frankly the president has been talking about for a long time.” The man arrested following Tuesday’s attack is from Uzbekistan.

Sanders was asked on Wednesday about Trump’s critical tweets about New York Sen. Chuck Schumer. Sanders says the Republican president “has not blamed” the New York Democrat and “doesn’t feel that the senator is responsible for the attack.”

Police say eight people died in the attack. They say the truck driver mowed people down on the bike path and crashed into a school bus and then an officer shot and wounded him.

The White House says President Donald Trump’s administration considers a truck driver who mowed down and killed people on a New York bike path to be an “enemy combatant.”

Sanders says the actions of the attacker justify the enemy combatant label. She says Trump isn’t calling on the attacker to be moved to Guantanamo Bay but “certainly would support it if he felt like that was the best move.”

Tuesday’s truck attack happened near the World Trade Center and killed eight people. Officials say the attacker was shot and wounded by police and has yet to be charged.

Sanders says the determination hasn’t been made whether to move him out of the civilian justice system.

A bell that London gave to New York City after Sept. 11, 2001, has tolled in honor of those killed in the truck attack on a bike path near the World Trade Center.

St. Paul’s Chapel is part of the Parish of Trinity Church Wall Street and rang the Bell of Hope on Wednesday. It’s located near the lower Manhattan neighborhood where a truck driver plowed into people on Tuesday, killing eight.

The historic church is offering prayers for those killed, injured and traumatized and for their loved ones.

Court records show a man accused of killing eight people with a truck in New York City was cited several times in Nebraska and Iowa for trucking violations.

Online court records in Nebraska show Sayfullo Saipov was most recently ticketed by the Nebraska State Patrol on Feb. 4 for having an overweight truck in Cass County and paid the $75 fine.

In March 2014, he pleaded guilty and was fined $50 in Lincoln County for failing to stop and have his truck weighed.

In October 2011, Saipov pleaded guilty to driving more than 11 hours in a 14-hour period in Cass County and paid a $50 fine. Six weeks later, he was ticketed for driving an overweight truck through Nebraska and fined $150.

In Iowa, Saipov paid $127.50 in court costs and fines for not keeping his driving log current in December 2011.

He is accused of taking a deadly drive down a crowded bike path in New York City on Tuesday.

The U.S. Department of Homeland Security says the suspect in the New York City truck attack entered the United States in 2010 under the diversity visa program.

Homeland Security officials are confirming that the immigrant from Uzbekistan arrived in the U.S. that way.

It’s a program for those from countries with low rates of immigration to the U.S.

President Donald Trump is calling on Congress to eliminate the program “as soon as possible.” The president said Wednesday the program is “not good,” and says the U.S. needs to “get much tougher.”

The suspect in the attack, 29-year-old Sayfullo Saipov, is accused of driving a rental truck down a crowded bike path in New York City on Tuesday and killing eight people.

Chief of Department Carlos Gomez vows that the marathon on Sunday will be a “very safe event.”

Gomez said Wednesday that there also will be an abundance of plainclothes officers, bomb dogs and helicopter surveillance.

Deputy Police Commissioner John Miller says the driver in Tuesday’s deadly bike path attack had been planning the carnage for weeks and did it “in the name of ISIS.”

Trump says he will ask Congress to “immediately” begin work to terminate the Diversity Immigrant Visa Program, which he says was used by the alleged attacker to enter the United States.

Officials have not yet said that was the case.

Trump says “we will take all necessary steps to protect our people.”

Speaking before a Cabinet meeting at the White House, Trump said “all of America is praying and grieving” with the victims.

He says: “Our hearts break for them.”

Cuomo said the president’s tweets “were not helpful.” He added, “You play into the hands of the terrorists to the extent you disrupt and divide … The tone now should be the exact opposite.”

Both Cuomo and New York City Mayor Bill de Blasio said Trump had yet to reach out personally.

Trump tweeted that Schumer is “helping to import Europe’s problems.”

He called the visa lottery program that allowed the suspect to enter the country “a Chuck Schumer beauty.”

New York City’s police commissioner says the officer who shot the man responsible for a deadly rampage on a Manhattan bike path is too modest to admit he’s a hero.

Officer Ryan Nash was on a routine call at a nearby school when he and his partner were told there had been an accident outside.

The pair raced outside and encountered Sayfullo Saipov in the street, waving two firearms that were later revealed to be a paintball gun and a pellet gun.

Commissioner James O’Neill said of Nash, “I don’t think we could find a more humble human being.”

A New York police department official says it appears the driver in the deadly bike path attack has links to people who have been investigated.

However, Deputy Commissioner John Miller says the driver himself was never a previous subject of investigation by the FBI or police.

Miller said Wednesday that the man had been planning the attack for weeks and did it “in the name of ISIS.”

He says there were “multiple knives” in addition to imitation guns displayed by the attacker, who was wounded by a police officer. Miller said the driver had handwritten notes that essentially said the Islamic State will “endure forever.”

Eight people were killed and a number of others injured in Tuesday’s attack near the World Trade Center.

Deputy Commissioner John Miller says the attacker had been planning it for weeks, and had “multiple knives” in addition to imitation guns.

A New York police department official says the driver in the deadly truck bombing had been planning it for weeks and did it “in the name of ISIS.”

Deputy Commissioner John Miller made the remarks at a briefing Wednesday by city, state and federal officials.

He says there were “multiple knives” in addition to imitation guns displayed by the attacker, who was wounded by a police officer.

Hundreds of detectives worked through the night following the Tuesday attack. Among other things, they’ve been “meticulously” collecting security video along the highway that the suspect used before mowing down people on a bike path next to the World Trade Center, killing eight people.

Nigro and other officials spoke Wednesday at a briefing, one day after an attack along a bike path near the World Trade Center.

An Ohio truck driver says the man accused of killing eight people with a truck in New York City was argumentative, seemed to harbor radical views and saw his work life spiraling down.

Mirrakhmat Muminov says Sayfullo Saipov lived in Stow, Ohio, for a few years. He says he knew Saipov because they were both Uzbek truck drivers.

Muminov says Saipov lost his insurance on his truck because of a few traffic tickets. He says companies stopped hiring Saipov, so he left for New Jersey.

Muminov said he heard from Saipov’s friends that Saipov’s truck engine blew up a few months ago in New Jersey. He says that “probably hurt him more than anything.”

Muminov also says Saipov was “not happy with his life” and would get into arguments with his friends and family.

Secretary of State Rex Tillerson and his Belgian counterpart are vowing to step up counterterrorism cooperation after the New York truck attack that killed eight people, including a young Belgian.

Meeting Belgian Foreign Minister Didier Reynders, Tillerson said Wednesday “we have seen the evil face of terror in our borders.”

Reynders noted previous attacks in Belgium and voiced solidarity with the U.S.

He said “homegrown terrorism” is as real in Europe as the United States. Together, he says, they can combat the global challenge.

They put the bag in a vehicle on Wednesday, then went back into the cordoned off area where the truck driver lives.

On Tuesday, a man in a rented pickup truck mowed down pedestrians and cyclists along a busy bike path in lower Manhattan, near the World Trade Center, killing eight people.

The Uzbek immigrant who was the truck driver was wounded by police.

Sweden’s Prime Minister Stefan Lofven says the rented pickup that mowed down pedestrians and bicyclists in New York, killing eight and injuring 11 others resembles “very much” the “coward attack” in Stockholm earlier this year.

In April, an Uzbek man, Rakhmat Akilov, drove a stolen beer truck into a crowd of afternoon shoppers outside the upmarket Ahlens store in Stockholm, killing four and injuring 15 others.

Lofven said Wednesday “how a person can take a vehicle and use it to kill innocent fellow human beings is beyond my understanding.”

Lofven told Swedish radio that the world community “must be stronger than terrorism.”

One of the people injured in an attack on a New York City bike path is a native of Argentina who lives just outside Boston.

The Argentine foreign ministry says Martin Marro is recovering from his injuries at a Manhattan hospital.

Several of Marro’s high school classmates from Argentina came to the U.S. to visit him and celebrate the 30th anniversary of their graduation. Five of them died in the attack.

Marro works as a biomedical researcher and lives in Newton. Last week, he hosted a fundraiser for a local Republican candidate that was attended by Massachusetts Gov. Charlie Baker. Photos of Marro and his wife posing with Baker were posted to Facebook.

Marro’s friend, Tom Mountain, calls him “one of the nicest guys you’d ever want to meet.”