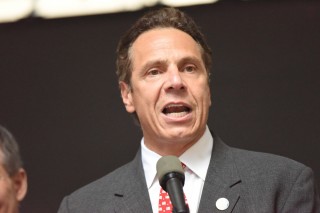 The complaint says that the ads reference North Carolina’s transgender bathroom law, describing New York as “where we understand the value of diversity” and “where the true leaders are.” North Carolina Governor Pat McCrory is up for reelection in November. Orr, who told WSJ that he is not connected to the McCrory campaign or administration, is claiming that the ads “mention North Carolina and its leadership in a transparent attempt to criticize, interfere and affect the impending North Carolina elections,” in violation of the Hatch Act.

The Hatch Act is comprised of a series of federal statutes (U.S. Code Sections 7321-7326 to be precise) that regulate the political activity of sitting government officials. The Act says that an official is not permitted to “use his official authority or influence for the purpose of interfering with or affecting the result of an election.” Orr’s complaint says that Cuomo’s ads, which started running in late June and are no longer on the air, did just that by “[b]y using public funds to promote New York as supporting certain policies and implicitly criticizing contrary political decisions made in North Carolina.” Orr also filed a complaint regarding the ads with New York’s Joint Commission on Public Ethics.

Cuomo spokesman John P.L. Kelly, said the complaints are “frivolous,” and that “[i]t would be funny if the issues we were actually talking about did not involve human rights and basic equality.” He added, “New York welcomes everyone—everyone—who seeks to embrace freedom while pursuing their dreams.”