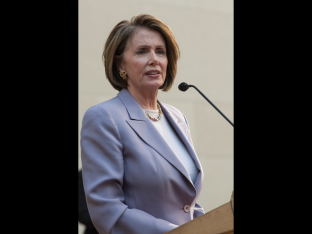 House Minority Leader Nancy Pelosi just confirmed what many have suspected for months — Democratic Party leaders are willing to ignore anything that might get in the way of Hillary Clinton winning the White House.

In an interview with USA Today on Wednesday, reporter Susan Page described Pelosi as “combative and confident” during the exchange that covered a handful of topics, including the FBI’s decision to not recommend charges against Clinton.

Page’s characterization of Pelosi and the fact that she did not press harder on this issue sort of speaks for itself, but we’ll leave the media analysis to another website.

Pelosi’s remarks clearly reveal she is very worried that the email issue is not going away soon enough.  In fact, she basically said as much by telling Page, “[Director Comey] said there’s not enough here to prosecute anything. I think that’s that.”

Director Comey might have the final say on whether to recommend criminal charges in the case, but that does not mean the issue is going away any time soon.

The Oversight Committee’s decision to call Director Comey to testify on Thursday can hardly be characterized as another “investigation.”  Congressional oversight over executive branch agencies, including the FBI, is central to our system of checks and balances.  Given the bi-partisan confusion surrounding the announcement on Tuesday, one might think both parties would be more than happy to question Director Comey further about his decision.

But not Pelosi, who in a moment of accidental honesty revealed her true feelings.

Yes, the FBI Director said “no” to recommending criminal charges.  But now the American people, through their elected representatives, get to find out the reason(s) “why.”