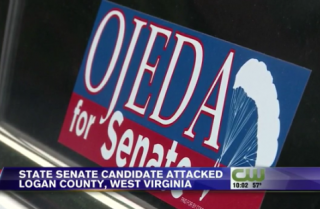 Two days before West Virginia’s primary elections, Democratic candidate for State Senate, Richard Ojeda, was at a cookout at a friend’s home, when he was allegedly attacked by another guest. According to WSAZ-TV, Jonathan Porter allegedly asked Ojeda to place a bumper sticker on his vehicle. Porter then reportedly attacked Ojeda from behind and then tried to run him over with a truck.

Porter fled the scene, but later turned himself in to an off-duty police officer.

Ojeda was hospitalized with broken facial bones and a concussion. The primary election is on Tuesday. Ojeda’s family members believe the attack was politically motivated, as he had been threatened in the past. Ojeda’s opponent, incumbent Art Kirkendoll, said in a statement, “I do not now, nor have I ever, condoned violence. It has no place in our political campaigns or in our communities. My and my family’s thoughts and prayers are with my opponent and his family and we wish him a speedy recovery”