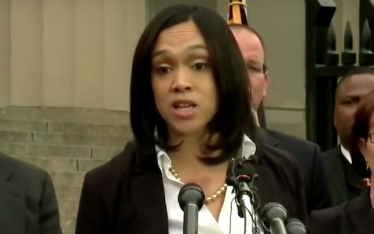 Daily case log records from the Baltimore police detective who led the department’s investigation into the death of Freddie Gray reportedly show prosecutors provided her with a narrative to read to the grand jury that she believed was misleading.  Only a few hours after she provided her testimony, the grand jury then issued an indictment against the six officers.

The Baltimore Sun reported on Sunday that they obtained copies of Detective Dawnyell Taylor’s daily logs of case notes that span a four-month period from the date of Gray’s death, April 19, 2015, through August 2015.  Taylor’s case notes provide new insight into the grand jury proceedings that led to the indictments and raise serious questions about how State’s Attorney Marilyn Mosby and her deputies conducted the investigation surrounding Gray’s death.

According to her case notes reviewed by the Sun, Taylor says prosecutor Janice Bledsoe handed her a summary narrative of the case just prior to her testifying before the grand jury.  Taylor wrote, “As I read over the narrative it had several things that I found to be inconsistent with our investigation.  I thought the statements in the narrative were misquoted.”

She added that she felt “conflicted” as to whether to confront Bledsoe over her misgivings, but wrote she ultimately decided to read the narrative to the grand jury.

“With great conflict I was sworn in and read the narrative provided,” Taylor wrote in the notes.

Taylor also wrote that the prosecutor would intervene to answer any questions that grand jurors raised while she was in the room.

“It was at this time that I realized that she did not intend for me to answer any questions because all of my answers would obviously conflict with what I had just read to them,” Taylor wrote.

Early in the investigation before charges were filed Taylor also wrote about her concerns with how prosecutors were handling the case.  In her notes she wrote that it was “clear that [Bledsoe] did not need to listen to any of the evidence as she had made up her mind to charge these officers.”

The newspaper spoke to former Baltimore homicide detective Joshua Ellsworth who said he had “never heard of the [state’s attorney’s office] providing an investigator with a prepared statement.”   He also said that the investigators typically answered grand jurors questions on their own, without the prosecutor jumping in.

Robert Bonsib, a former state and federal prosecutor, also spoke with the paper about the case notes.  He said that while it is common to meet with an investigator before they appear before the grand jury, “[c]learly a prosecutor isn’t supposed to tell a witness what to say, in the sense of saying anything that isn’t true or accurate or a product of their own knowledge.”

Mosby’s office reportedly declined to respond to the allegations, likely due to the gag order that prohibits all parties involved in the cases from commenting publicly about the matter.

Portions of Taylor’s notes first came to light during the trial of Officer Caesar Goodson after the judge rebuked prosecutors for failing to turn over the notes during the discovery process as required under the law.  Taylor’s notes included a claim that the medical examiner initially told police that Gray’s death was an accident.  However, the medical examiner denied the claim when she testified at the trial.

Officer Goodson was acquitted of all charges last week, including the most serious charge faced by any of the six officers, second-degree murder in the death of Freddie Gray.