Lay Off Weiner! He’s a Perv But, Please, Child Welfare Won’t Come After Him 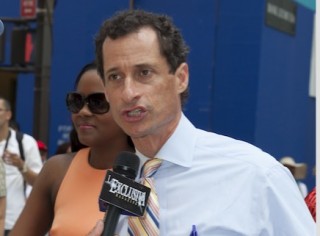 Americans do love a sex scandal. Failing to take up the pitchfork against a sexual deviant is as un-American as refusing to stand up for the… oh never mind.

In our sex-obsessed, politician-hating world, few things could capture our collective attention more than a disgraced politician who habitually embarrasses his wife by sending nasty pictures to women across the country. The fact that the wife is the right-hand of one of the most-hated villainesses (read also, “most-loved heroines”) of all time makes the story all the more tantalizing.

EXCLUSIVE: “I have a 3 yr old and a busted marriage” https://t.co/QbuAiAocXa

As far as I’m concerned, Anthony Weiner deserves every bit of the “what could he possibly have been thinking” criticism. The guy clearly has some serious judgment issues. Or maybe, as so many television experts have opined, he has an “illness.” Personally, I think he’s just bored and depressed. His wife is hitting the campaign trail while he’s home on daddy-duty. He’s no longer the promising Congressman or future Mayor – he’s just Huma’s husband, and that’s bound to get old. But while Weiner’s ridiculous pride in his own genitalia is pretty disturbing, it’s hardly the basis for a child-protective case.

Yesterday’s New York Post published a story  in which some famous divorce lawyers threw out the child welfare card. The headline suggested, “Experts Expect Children’s Services to Investigate Weiner.” They are basing this on the fact that Weiner apparently sent a scandalous photo with his child right next to him in bed.  As a former prosecutor for New York City’s Administration for Children’s Services, I seriously doubt that’s true.   No one with an understanding of child protective law could seriously expect authorities to begin a child abuse or neglect investigation based on yesterday’s news cycle. But don’t just take my word for it. Let’s look at the statute. Article 10 of New York State Family Court Law defines the two grounds under which a parent can be prosecuted for bad parenting: “abuse” and “neglect.” I think we can all agree that Weiner’s sexting isn’t a life-and-death situation (which is essentially what’s necessary for an “abuse” filing). That leaves us with “neglect.”

(h) “Impairment of emotional health” and “impairment of mental or emotional condition” includes a state of substantially diminished psychological or intellectual functioning in relation to, but not limited to, such factors as failure to thrive, control of aggressive or self-destructive impulses, ability to think and reason, or acting out or misbehavior, including incorrigibility, ungovernability or habitual truancy; provided, however, that such impairment must be clearly attributable to the unwillingness or inability of the respondent to exercise a minimum degree of care toward the child.

Even the loosest reading of this statute would require the prosecuting agency to prove that Weiner’s lewd texting put his son at “substantial risk of harm” or “inadequately supervised” his son to such an extent that the child has become seriously emotionally impaired. Since the Weiner’s young son was asleep in the now-infamous package shot, there’s really no basis for any claim that the child was harmed or impaired by it. Given the child’s young age, even if he’d been awake, it’s unlikely that he would have been emotionally scarred from this incident. That’s not to say that the Weiner-penis-child combo wasn’t seriously disturbing; the law just doesn’t prohibit every bad thing parents do.

Child neglect laws target serious malfeasance by parents: failing to adequately feed or shelter one’s child, subjecting a child to the dangers of drug and alcohol abuse, exposing a child to domestic violence, or injuring a child by excessive corporal punishment. To be blunt, child protective workers have better things to do than police flirty text messages between silly men and the women who think they’re cute.

As a society, we want to condemn Anthony Weiner for putting a sexual image and an innocent child in such close proximity to one another. The combination is just gross. Within the context of Weiner’s disgraced past, as well as his current position as the spouse of a top-Clinton aide, his actions clearly indicate an undeniable lapse of judgment. But child-protective laws typically do not punish parents for even serious lapses of judgment. Parents are allowed to be stupid – as long as that stupidity isn’t likely to physically hurting their kids. Had Weiner sent a photo of a gun on his lap while his son slept in the background, it would have presented an arguably more dangerous scene – but one that would have been dismissed much quicker by “experts” as having been harmless.

So why did top matrimonial lawyers like Bernard Clair and Raoul Felder tell the New York Post that child protective services could become involved with this case? Simple. As matrimonial lawyers to the stars, they know that the mere suggestion of child welfare acts as blood in the water of any divorce case. Huma Abedin and Anthony Weiner are at the precipice of an arduous, expensive, public divorce case. During that case, they’ll likely argue about everything from assets to alimony – and custody of the couple’s son may well take center stage. High-powered working Mom with a job in the White House versus devoted stay-at-home Dad with a sexting addiction would be a courtroom battle royale. And for a matrimonial lawyer, the temptation to tip the scales with a suggestion that Weiner is a sexual deviant who is unfit to parent would be irresistible.

Once raised, the issue of child sexual abuse becomes a bell that cannot be unrung. If Abedin’s divorce lawyer made a compelling case that Weiner suffers from a sexual addiction that endangers their child, it would set a chain of events into motion, even without anyone involved honestly believing the child was in any real danger. The presiding judge would likely “err on the side of caution” and order a child protective investigation, case workers would investigate – and the entire ordeal would become nothing more than leverage for whatever was really at issue (alimony, child support, parenting schedule, etc.) in the couple’s divorce case.

The New York Post reported today that the Administration for Children’s Services (“ACS”) has launched an investigation into Anthony Weiner. As a former ACS prosecutor, I’d like to provide a little context. The majority of ACS investigations are sparked by a report received by the New York State Central Register.

When any report is received (either by an identified or an anonymous source), that report is investigated within 24 hours by child-protective professionals.   Cases in New York City that are considered “founded” by the investigators then progress within the child-protective system. Those that are considered “unfounded” are closed without further action by ACS. When necessary, families are offered services to help keep children safe. When investigators feel that a child has been neglected or abused, they may also choose to proceed to the ACS legal department to pursue an Article 10 proceeding against the parents. In order for an abuse or neglect case to proceed against any parent, the ACS staff attorneys must first determine that a threshold amount of credible evidence exists to begin litigation.

At this point, we know only that the New York Post has reported ACS to have “investigated” Anthony Weiner. It remains my contention that without more evidence of wrongdoing or danger to the child, the recent photos texted by Weiner would not be sufficient evidence to justify the start of an Article 10 proceeding against him. Without more information, it is unclear whether ACS investigated Weiner simply because it received a report of wrongdoing, or whether ACS independently believed that he might have neglected his child.   LawNewz will continue to update this story as details become available.