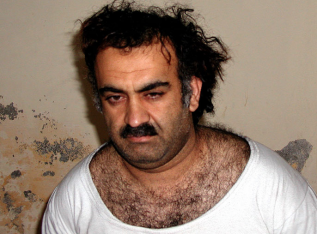 Defense lawyers representing Khalid Sheik Mohammed and four other alleged 9/11 plotters have accused prosecutors of destroying evidence related to the suspects’ detention in a network of CIA prisons, or black sites.  The defense lawyers also claim the trial judge overseeing the case approved of the destruction of evidence during a secret hearing held without their knowledge.

The Miami Herald newspaper reported these extraordinary allegations in an article published on Sunday.  Defense lawyers claim documents show the U.S. government removed “fixtures” during the “decommissioning”  process of a secret CIA prison overseas.  Defense attorney Jay Connell told the newspaper that the attorneys has sought to visit the former secret prison in order to “exercise our own professional judgment as to what to document about the black sites.”  The defense lawyers reportedly thought they had successfully halted the destruction of the secret prison, pending a final judicial ruling on the matter.

However, the defense lawyers announced on Sunday that they learned of the destruction of the prison in February and that the decision was made after a secret meeting between prosecutors and trial judge Army Col. James L. Pohl.  Rather than allowing defense lawyers to visit the facility, prosecutors convinced the judge it would be sufficient to simply provide the defense team with top-secret photographs and a diagram of one of the secret facilities.

According to the report, Army Brig. Gen. Mark Martins, the chief prosecutor, did not directly address the reported destruction of the secret prison.  However, he did defend the decision to prevent the defense team from independently visiting the black site.  Gen. Martins told the newspaper that Congress created the procedure under the Classified Information Protection Act and Military Commissions Act, “so that our court processes don’t squander national security and secrets.”  The general added:

We’re not going to let an individual criminal defendant … mortgage the whole future of the country in one case, because they’ve got something that could force government officials to try to figure out how to accommodate it.  We’re not allowed to compromise national security just to get to a result in a case. That’s what Congress is trying to prevent.

Gen. Martins also provided reporters with the relevant portion of the Manual for Military Commissions that allows prosecutors to hold secret meeting with the judge.

Nonetheless, four of the five defendants in the case have now reportedly requested that Judge Pohl disqualify himself from presiding over the prosecutions as a result of the reports of destruction of evidence.   There is no indication of when a decision will be made about Judge Pohl’s continued participation in the case.