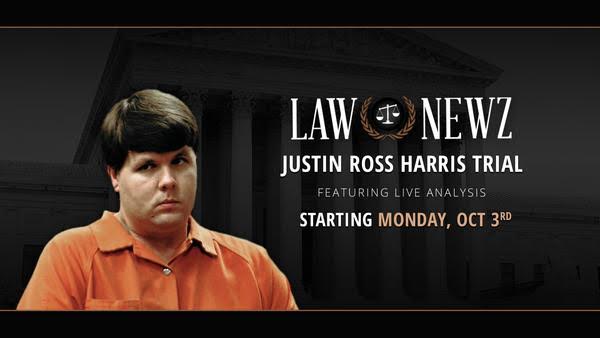 The high profile murder trial of Justin Ross Harris is scheduled to begin on Monday, and LawNewz’s Facebook page, is the place to be for gavel to gavel live coverage of the proceedings.

Harris is accused of intentionally leaving his 22-month-old son Cooper in a hot car to die. In addition to charges related to Cooper’s death, Harris — who was married at the time — is also accused of exchanging sexual messages and pictures with an underage girl.

In fact, he was allegedly messaging six different women at the time, including while his son was dying. Prosecutors will likely portray Harris as a man who actively sought to get away from the responsibilities of family life. Harris claims it was all a horrible accident.

LawNewz will present the trial live as well as providing real time legal analysis exclusively on the Facebook Live platform.

LawNewz will also have a number of well-known guests joining to provide expert opinions on the case. “We have quickly become the place to watch live trials and Facebook Live allows us to take it to a new level by not just streaming the trial but truly covering it as cable channels have before us,” LawNewz founder Dan Abrams said.

Head to our Facebook page for gavel to gavel coverage, starting at 8:30 a.m. Monday.