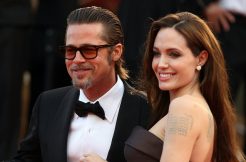 The newly split “Brangelina” continue to sort things out. Actors Brad Pitt and Angelina Jolie have settled on a temporary custody deal according to a Friday report by TMZ.

According to anonymous sources “familiar with the situation,” the two are following recommendations handed down by the L.A. County Dept. of Children and Family Services. Jolie gets custody of their six children. Nonetheless, Pitt can spend time with the kids as long as a therapist is there for the first visit. This therapist will decide whether or not Pitt must be monitored in future visits. Reportedly, Pitt must also undergo random testing for drugs and alcohol. Both parents will undergo individual counseling, and there will also be appointments for the whole family.

If neither agreed to this, they would have gone to court, but it’s not like this reported deal would have lasted long anyway. It is scheduled to run out in 3 weeks, at which point DCFS may decide to change it up, or send this case to court anyway.

The couple’s divorce was announced on September 20, sparking widespread media coverage and murky allegations about Pitt’s alleged abuse of the children.

[image via Twocoms and Shutterstock]
–