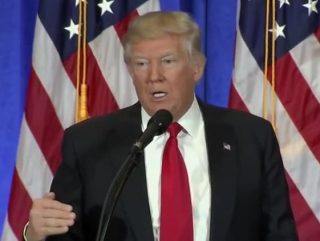 Earlier today, Donald Trump held a press conference, where his attorney, Sheri Dillon, spoke regarding Trump’s business interests. As LawNewz.com noted, Dillon is a partner at the law firm Morgan Lewis & Bokius. Using the services of the firm makes sense for Trump, as Morgan Lewis is a world-renowned organization. In fact, just last year, Chambers and Partners rated them as the top firm in a certain country, and guess which one it is.

Did you guess Russia? You probably guessed Russia.

According to a press release on Morgan Lewis’ website from May, the firm was given the honors in the 2016 Chambers Europe guide to law firms. The title is awarded based on a firm’s “client service, preeminence in the relevant market, notable achievements over the past 12 months, outstanding work, and impressive strategic growth.”

The firm’s Moscow office provides services for litigation, real estate transactions, international arbitration, mergers and acquisitions, as well as corporate and finance matters. It has more than 40 lawyers and staff on hand and opened in 2012.

Dillon joined the firm in 2014 and works in their Washington, D.C. office.