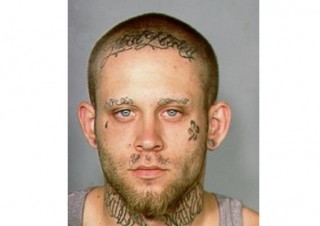 A Las Vegas judge felt that a man accused of armed robbery couldn’t get a fair trial due to his appearance, the Las Vegas Review-Journal reported. Bayzle Morgan, as seen in a 2013 photo, has a number of facial tattoos, including a swastika within a clover, a teardrop, and the phrase “Most Wanted” on his forehead, as well as the phrase “Baby Nazi” on his neck. He also reportedly has an iron cross on the back of his head.

Last month, potential jurors entered the Las Vegas Regional Justice Center, but could not get past the ink. “If it’s a certain kind of tattoo, in a certain spot, it signifies something more,” one juror said. Another said the tattoos “could be indicative of previous criminal acts.”

“How is this man supposed to get a fair trial if everybody comes in here and thinks they might be influenced by the tattoos?” District Judge Richard Scotti said. Judge Scotti then ordered that Morgan have the tattoos covered with makeup going forward.

This particular case centers on the alleged theft of a motorcycle at gunpoint in May 2013. Morgan also has a separate case, where he is charged with murdering a 75-year-old woman days before the alleged robbery.