It’s Time To Speak Up Justice Thomas, It’s Your Job! 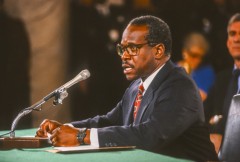 Silence is often interpreted in myriad ways: fear of rejection or isolation, pensive reflection, or introvertedness, to name a few. When the Supreme Court begins its new term this new month, it will mark 10 years since controversial justice Clarence Thomas has asked a question in the Cass Gilbert-styled Washington D.C. building. Associate Justice Thomas has not asked a question from the bench since February 2006, when he spoke in the opening arguments of a death penalty case.

The Court’s only black justice has justified his stance on numerous occasions. Thomas has explained his engagement deficiency as a proclivity for attorney advocation. At a 2013 Harvard Law school lecture, Thomas said, “I think it’s unnecessary in deciding cases to ask that many questions, and I don’t think it’s helpful.” Fellow conservative and former Chief Justice William H. Rehnquist predated Thomas’ silence with a contrary view in 1987, saying, “If oral argument provides nothing more than a summary of the brief in monologue, it is of very little value to the court.” Thomas has reiterated a vision that his silence is derivative of the all-inclusive nature of a complete legal brief.

Supreme Court Justices engage in more than opinion writing, they navigate the treacherous waters of jurisprudential tête-à-têtes between lawyers and justices — and justices and justices — that not only create public record but, for posterity, provide crucial insight into the cognitive processes of the justices as they reason towards a majority.

The Supreme Court does not televise its arguments — they should. While Justice Thomas’s seemingly cheeky vow of silence may be self-amusing, his reticence is a disservice to the annals of legal history and the American people. Further, litigants are disadvantaged by an inability to engross one of nine arbiters as they articulate their cases. An immutably mute justice is antithetic to the adversarial principles that serve our American democracy.

As Thomas luxuriates in the comfort of his leather seat atop the nation’s highest court, his selective tranquility veiled as intellectual curiosity is a disconcerting portrait of disinterest. Justice Thomas can justify his silence however he chooses, but his verbal inaction is an embarrassing representation of the position he holds, a petulant unwillingness to provoke exchange and a demeaning and intellectually dishonest approach to the distinction of “the highest court in the land.”

Clarence Thomas was nominated to the United States Supreme Court in 1991 as an appointee of President George H.W. Bush. His nomination gave rise to intense partisan diatribe, public criticism and a fizzing bitterness in Washington. Thomas’s infamous confirmation hearing was the subject of socio-political controversy that centered on claims that the justice sexually harassed Anita Hill, his subordinate at the Department of Education and Equal Employment Opportunity Commission. The U.S. Senate confirmed the Yale Law School graduate by the slimmest margin ever, 52-48.