How The Republican Candidates Responded to Justice Scalia’s Death 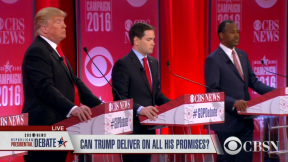 Ted Cruz began his remarks by stating, “[W]e have 80 years of precedent of not confirming justices in an election year.” Cruz continued by noting the importance of the new vacancy as underscoring the stakes of the current election. The Texas Senator emphasized his desire to nominate a principled Constitutionalist, like Scalia, to the Court.

Justice Scalia was a legal giant. He was a brilliant man, he was a faithful man…The Senate needs to stand strong. We cannot let Barack Obama nominate another liberal appointee.

Senator Rubio also affirmed his belief that the President should not appoint a justice and made a passionate plea for how the Constitution should be interpreted.

Governor Kasich chose to preface his remarks with a condemnation of partisan politics and a criticism of the expediency with which politics became the headline in the wake of Scalia’s sudden death.

I would like the President for once to put the country first. I believe the President should not move forward with a nomination. I think we ought to let the next President decide.

Jeb Bush poignantly observed the Constitutional premise underlying the Supreme Court nomination process. While Bush believes there should not be a specific-issue litmus test for the Court, he believes only justices with a proven record in the judiciary should be nominated.

The simple fact is that the next President needs to appoint someone with a proven Conservative record. Of course the President has every right to nominate a justice.

Carson chose to comment on the importance of the Supreme Court as an institution of the American governmental system and opined on the the thinking of a lifetime appointment as antiquated, given that the “average age of death was 50” when the language was written. Ultimately, Carson agreed with the other candidates that President Obama should not nominate a justice.

I fully agree that we should not allow a judge to be appointed during his [President Obama’s] time.

Stay tuned to LawNewz.com for legal analysis of the Republican Presidential Debate.