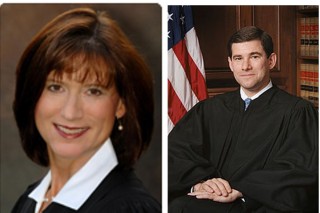 “We could have a Diane Sykes or a Bill Pryor, we have some fantastic people,” Trump told the audience. Both judges are well-known conservatives serving on the federal level.

Pryor is a federal judge in the United States Court of Appeals for the Eleventh Circuit. He was nominated by President George W. Bush in 2003. His nomination was filibustered so in 2004, President Bush installed the former Alabama Attorney General on the court during a congressional recess appointment. Democrats scrutinized Pryor for some of his conservative stands, including on Roe v. Wade. Pryor previously said, according to confirmation hearing testimony, that Roe was “the worst abomination in constitutional law in history.”  After a higher court ruling on a Alabama execution case, he allegedly ridiculed the Supreme Court by saying “This issue should not be decided by nine octogenarian lawyers who happen to sit on the Supreme Court.” Most recently, Pryor was nominated by President Obama to sit on the United States Sentencing Commission.

[images via Wisconsin Supreme Court, and WikiCommons via Federal Court]