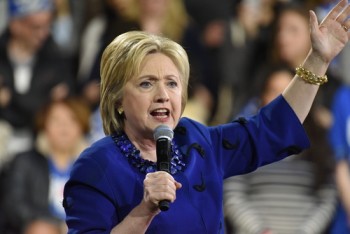 Democratic presidential candidate Hillary Clinton was in Wisconsin late Monday afternoon where she made her most pointed comments to date on the current Supreme Court vacancy.

Clinton, speaking before a crowd of supporters at a private event on the campus of UW-Madison ahead of the Wisconsin Democratic primary on April 5, targeted GOP Senate Judiciary Committee Chairman Chuck Grassley, GOP presidential frontrunner Donald Trump and Wisconsin GOP Senator Ron Johnson in a speech about the importance of upcoming election on the future of the Supreme Court.

In her speech, Clinton outlined what she described as “core pillars” of the progressive movement that may be at risk depending on the make up of the Supreme Court.

“The next president could end up nominating multiple justices; that means whoever America elects this fall will help determine the future of the court for decades to come,” Clinton told the crowd.

“In a single term the Supreme Court could demolish pillars of the progressive movement,” she said.

Clinton then rattled off a list of issues that the Court is expected to hear in upcoming terms, including questions important to progressives such as abortion, voting rights, public unions, electoral maps, affirmative action, and immigration.

She also highlighted Citizens United — reminding the crowd that case began over what she called “another rightwing attack” on her — which she described as an example of the “dangerous turn the Court has taken in recent years- protecting the rights of corporations over people.”

Clinton then warned that a President Trump would be even more dangerous.

“What kind of Justice would a president Trump appoint; or attorney general; or lower court justices?” Clinton asked.

In what can viewed as a sneak-peek of what we might see from her in the general election, Clinton recited a handful of Trump’s most controversial statements, such as banning all Muslims from entering the United States, and then asked the crowd to image what could happen to the Court if he was able to nominate three or more justices.

Clinton also told the crowd that the current fight over the replacement of Justice Antonin Scalia is just another example of “obstructionism” that she says has come to characterize Republican lawmakers during the Obama presidency.  She called on Sen. Grassley to hold hearings on Merrick Garland’s nomination as soon as the Senate returns from its spring recess.

Reporters asked Grassley about these remarks prior to the speech and he released the following statement:

She also asked the crowd to flood Wisconsin Senator Ron Johnson’s office with calls and e-mails asking him to “do his job” and call for hearings on the Garland nomination.  She also told voters to support Johnson’s opponent, democrat Russ Feingold, in the upcoming senate election.

Clinton concluded her remarks by again asking the attendees to keep the Supreme Court “at the front of their minds as they consider their Choice for president in 2016.”