Hillary Clinton on Email Probe: ‘No One Has Reached Out to Me’ 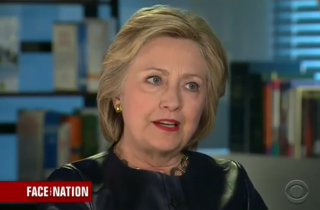 Democratic Presidential candidate Hillary Clinton appeared on Face the Nation on Sunday, and addressed the latest in the FBI’s inquiry into the private email server she used as Secretary of State. “No one has reached out to me yet,” Clinton said, but added that she has encouraged her assistants to cooperate in the investigation that she referred to as a “security inquiry.”

This is particularly interesting, considering that CBS News reported on Friday that Clinton is indeed expected to be interviewed by the FBI some time in the next few weeks. The Face the Nation interview was recorded on Friday, but it is unclear whether CBS or Clinton were aware of the FBI’s latest plans at the time.

Clinton insisted that she took classified materials seriously, while also admitting that the private server “was a mistake.”