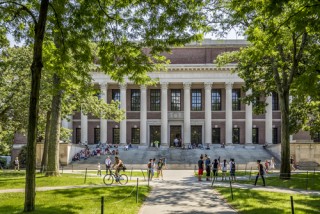 Harvard University, in an effort to reduce sexual assaults by pressuring fraternities and other all-male student entities to cease discriminating on the basis of gender, has announced that it will bar student members of any such groups from leadership roles in campus organizations and sports teams.

Although media reports have emphasized its major impact on Harvard’s so-called final clubs, the rule would also apply to five of Harvard’s fraternities, and could encourage other colleges likewise concerned about fraternities and rape to take similar steps.

Those who argue that the Constitution’s freedom of association clause prohibits Harvard from cracking down on its students’ membership in single-sex fraternities and other discriminatory organizations are dead wrong for at least two different reasons.

The first reason is that the Supreme Court has held that there is no general freedom of association embodied under the First Amendment.  Rather, there are two narrowly defined  types of association which are protected, but neither appears to be applicable here.

The first is a so-called freedom of “expressive association.”  This permit organizations to discriminate on otherwise impermissible factors, but only when such discrimination is central to its role in speaking out, and expressing itself, on public issues.

Fraternities do not fall into this category because they do not regularly engage in speaking out on public issues, especially from a male point of view.  The argument is even weaker for the final clubs, which are reportedly so secretive that they rarely communicate with outsiders on any topics, much less those especially related to men

The second is a so-called freedom of “intimate association.” But it applies only to very small groups of people such as families, tiny collections of people sharing communal living, etc.

This would not appear to apply to fraternities because they are rather more like large private clubs. For this reason, I was able to sue to force the Cosmos Club in Washington, DC, to change its 100+ year rule against admitting female members.

The additional  reason why discriminatory organizations cannot rely on the U.S. Constitution as a shield from Harvard’s new policy is that, with only very narrow exceptions, the Constitution applies only to governmental bodies, and does not restrict what a private institution such as Harvard can do.

That’s why private colleges, for example, may discriminate on the basis of gender, but state supported ones cannot.  For example, I was able to bring another legal action which forced a previously all-male state-supported college to admit a female cadet for the very first time.

Colleges may also obviously have rules which apply to student conduct which occurs off campus, with some colleges taking action against students who engage is sexual assault even in private apartments, and other schools which go even further and prohibit any sexual activity outside marriage, the consumption of alcohol anywhere even by students over 21, etc.

To those who argue that a university should not try to interfere in student memberships in private organizations, I wonder if any major university would do nothing if it became widely known that its leaders were joining organizations closely associated with its college and made up of its students, but which refused to consider for membership any students who were black or Jewish.

If colleges would not tolerate this, it would seem that the same policy should logically also apply to organizations affiliated with the college – including final clubs and fraternities – which discriminate on the basis of gender rather than on the basis of race or religion.

While the courts still apply a slightly different test to discrimination based upon gender than to similar actions based upon race or religion, the gap between the two tests is rapidly diminishing, even in situations where sexual privacy has been argued.  Well known examples include female reporters in male locker rooms, female guards observing male prisoners using the toilet, and, increasingly, anatomical males being permitted to use female restrooms if they self identify as female.

The argument that schools should stop supporting – or even tolerating – student entities which discriminate against women can be made even if eliminating such discrimination would have no effect whatsoever on the incidence of sexual assaults, including rape.

However, there is reason to believe that such a change might have a salutary effect on incidents of sexual assault.  Studies suggest that the rate of rapes committed  by fraternity members is significantly higher than among comparably situated male students.

So, while correlation does not necessary prove causation, there is reason to believe that it may in this case, and thus experimenting – as Harvard is prepared to do – to see if the correlation is more than a mere coincidence may be warranted.

In summary, there are two separate reasons – to oppose gender-based discrimination, and to possibly reduce the incidence of rape – why universities such as Harvard may want to try pressuring fraternities to admit females.

If the private university such as Harvard makes that choice, there is little protection offered by the First Amendment, since the Constitution does not apply to private universities, and protects only expressive association and intimate association – neither of which seem to apply to fraternities, sororities, or final clubs.

JOHN F. BANZHAF III is a professor of public interest law at George Washington University Law School.  Although best known for his antismoking activities, he has brought over 100 legal actions successfully fighting discrimination against women, and his proposal for adjudicating complaints of campus rape is about to be tested in Virginia.