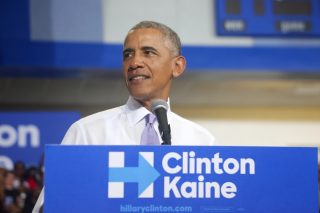 Now that the dust has begun to settle from this past week’s electoral cataclysm, there inevitably arises the question of whether President Obama ought to grant a presidential pardon to Hillary Clinton for whatever wrongdoing she might have committed in connection with her tenure as Secretary of State.  To do so would be entirely within his plenary power under the Pardon Clause of the Constitution (Art. II, Sec. 2, clause 1), but it would be a bad idea, not a good one, for multiple reasons.

This question arose the very day after the election, when White House Press Secretary Josh Earnest predictably was asked whether President Obama was considering it.  Rather than simply reply that a pardon carries an admission of guilt, that President Obama has said that he does not view Secretary Clinton as guilty of any crime, and that the answer is therefore “no,” Earnest slowly and deliberately equivocated by saying the following instead:

This of course left the door open, wide open, both to future such action by President Obama (most likely near the very end of his presidency) and to widespread public debate about it — regardless of whether one thinks Secretary Clinton would ever have a need for it or not.

Some say that there are “solid precedents” for such an action.  They cite, first and foremost, President Ford’s pardon of President Nixon.  Then they point to the fact that former CIA Director John Deutch received a presidential pardon from President Clinton for record-handling misconduct in particular.  And they also refer to President George H.W. Bush’s pardon of former Secretary of Defense Caspar Weinberger and others in connection with the “Iran-Contra” affair.

But each of these is actually a poor precedent for an Obama pardon of Hillary Clinton.  First, the Nixon pardon was sui generis, arguably an absolute necessity to prevent Nixon’s post-resignation prosecution for “high crimes” unquestionably committed during his presidency.  Secretary Clinton, by contrast, has been found not to have committed any crime during her tenure in office — and if it comes to light that she did so after leaving office, then she could not reasonably expect a pardon for that.

CIA Director Deutch indeed was found to have handled classified information on government-owned computers configured for unclassified use during his tenure, but he admitted his criminal culpability during plea negotiations that extended into the very last days of the Clinton Administration.  In fact, as it was reliably reported at the time, Deutch had agreed to plead guilty to a misdemeanor on the Clinton Administration’s last full day but was pardoned by President Clinton (along with more than 175 others) just hours before the end of the Clinton presidency.  Secretary Clinton, on the other hand, has vigorously maintained her innocence of any such crime and faces no judicial process that could lead her to follow Deutch’s example before January 20, 2017.

And as for the “Iran-Contra” pardon recipients, they had become embroiled in a complex U.S. foreign policy initiative that stemmed from the Cold War and involved an official “arms for hostages” trade that President Reagan initially denied but later admitted.  Reagan took “full responsibility” for his actions and those of his subordinates before leaving office, and President Bush acted in furtherance of this nearly four years later when his pardons foreclosed a scheduled prosecution of Secretary Weinberger and likewise exculpated others.  Most notably, his pardon statement explicitly decried “the criminalization of policy differences [that] should be addressed in the political arena.”

So a presidential pardon for Secretary Clinton would rest on very tenuous historical ground, especially as it would be antithetical to the firm positions of both parties to it (Obama and Clinton) that there is, in essence, nothing to pardon.  Indeed, Secretary Clinton’s receipt of a pardon would amount to an admission of criminality on her part, even if vaguely stated.  (Technically, the president’s power under the Constitution is so absolute that a pardon’s recipient need not consent to it — and indeed nearly all presidential pardons stem from formal applications processed by the Pardon Attorney’s Office in the Department of Justice — but it is hard to imagine President Obama granting one to Secretary Clinton without her knowng acquiescence to it.)

Most significantly, moreover, in this particular case a presidential pardon would send a very strong and damaging signal to federal officials, from the highest possible level, about whether they actually need to meet their statutory record-keeping obligations.

To be sure, the line between violations of civil law and criminal law can be blurred sometimes, especially when it comes to the proper maintenance of federal records.  In Secretary Clinton’s case, while the FBI certainly did investigate the possibility that her handling of classified information violated a criminal statute (but finding no prosecutable offense), what she plainly did violate were the requirements of civil laws — the Federal Records Act (“FRA”) and secondly the Freedom of Information Act (“FOIA”), which have no criminal prohibitions or penalties.

She violated the Federal Records Act when she somehow relegated unto herself the power to exclusively use a personal email account, not an official one.  She further violated the Federal Records Act when she took the wholly unprecedented step of connecting that personal account not to an email service provider such as Gmail, for instance, but rather to her own private server in the basement of her home.  She committed a series of further FRA violations when she permitted (or, worse yet, authorized) several members of her State Department staff to make official use of this server also, at a minimum casting a blind eye to what they did as well.  And she set an awful example for all federal employees when she managed to skirt the FRA’s vital record-disposition requirements upon her departure.

What is more, in doing all of this she also managed to blatantly circumvent the requirements of the Freedom of Information in the face of literally dozens of FOIA requests for access to her official records — requests that she doubtless knew about, at least through her personal aides, yet blithely ignored.  Hands down, she became the biggest “FOIA felon” (without having committed a “felony”) in that Act’s 50-year history.

And if she were to now receive a presidential pardon for what was done or might have been done during her State Department tenure, that would be tantamount to saying that everything she did and failed to do was actually OK.  Perceived as such, it would resonate far and wide throughout the federal community, where to the typical federal employee the distinction between types of laws and legal requirements can readily be lost.  And this would remain so for future federal employees as well.

In short, it would be a terrible precedent of its own.

Dan Metcalfe is a registered Democrat who said that he would vote for Hillary Clinton “if she escaped indictment and managed to become the Democratic presidential nominee” but ultimately found that he could not bring himself to do so. He served as Director of the Justice Department’s Office of Information and Privacy for more than 25 years, during which time he handled information-disclosure policy issues on the dozens of Clinton Administration scandals that arose within public view (as well as two that did not), including the fallout from President Clinton’s last-minute pardons in January 2001. Since retiring in 2007, he has taught secrecy law at American University’s Washington College of Law.

Editor’s Note: The presidential pardon power is found in Article II, not I. This article has been corrected to reflect that.