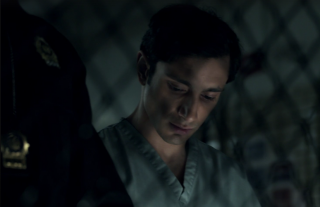 Sunday night, HBO premiered their new series, “The Night Of,” where a series of events results in Nasir “Naz” Khan (Riz Ahmed) being suspected of murdering a young woman he had met that night. Usually, crime shows don’t hold my attention for very long because I used to be a prosecutor, but this one had so many subtle twists and turns that appealed to the lawyer in me. In fact, you could probably make a pretty intense law school exam question based on the first episode, because there are so many legal issues that the average viewer probably missed.

First, here’s a brief recap of what happened before Naz met up with the police (spoilers ahead).

Naz, a straitlaced Pakistani-American student born to immigrant parents, was looking to go to a party in Manhattan but his ride bailed, so he stole his father’s taxi. Once he got into the city, a girl, Andrea Cornish (Sofia Black D’Elia), gets in looking for a ride, thinking he’s a cab driver. Naz ends up driving her to the water, where they hang out and have some drugs, because Naz is tired of being good all the time.

They go back to her place, where they drink, have more drugs, and play a game where they put their hands on a table and stab at the table with a knife, aiming for between their fingers. It doesn’t work out well and Naz stabs her in the hand, but she’s so gone that she doesn’t care, and they go upstairs and have sex. Some time later, Naz regains consciousness in a different room in the apartment, and then finds her in bed, dead and covered in blood. He has no idea what happens, so he bolts.

Unfortunately, Naz left his keys inside, and he has to break in just to get them. While inside, he sees the knife that he used to stab Andrea’s hand, and takes it, knowing how bad it would look. A neighbor sees him from a distance as he leaves and gets back in the taxi. He gets pulled over for making an illegal left turn, and that’s where things go from bad to worse.

It’s pretty wild, because neither we nor Naz know how Andrea died; for all we know, he killed her while he was intoxicated, but he doesn’t remember anything. Even if he didn’t do it, there is a ton of evidence against him, since he had sex with her and stabbed her, resulting in her blood getting all over the apartment, his hands, and the knife.

Things don’t look good for Naz, but the cops have already botched some of their investigation. Let’s take a look at what they did/didn’t do, that Naz’s new lawyer John Stone (John Turturo) could use against them to help his client.

1. They didn’t actually arrest him.

At first, it looked like Naz was being arrested for DWI, when one of the officers who pulled him over said she could smell that he was intoxicated. Yet, her partner encouraged her not to because he didn’t have a record. So then, it looked like they were going to arrest him for reckless driving, which seemed pretty baseless, since all he did was make a turn when a sign said not to. But when a call came in about a break-in in the area (the one Naz committed when he went back into Andrea’s home), they considered just letting Naz go because they were in a rush. Instead, they put him in the back of the car. No handcuffs, no arrest, no sign that they needed to question him about anything, nothing. They pretty much kidnapped him, under the pretense that maybe they’ll charge him for reckless driving when they have time to fill out the paperwork.

This is problematic, because police can detain you for questioning if they have reason to, but they have to be reasonably quick about it; or they can arrest you if they have probable cause. Since neither one of these things actually happened here, any evidence that they get as a result of taking him could potentially be tainted, under the Fruit of the Poisonous Tree doctrine. That basically means that evidence that the police obtain through an illegal search or seizure cannot be used at trial. This will come up again later.

After dragging Naz back to Andrea’s apartment where they investigated the break-in, a different officer finally brought him to the station house, where he waited. And waited. And then waited some more. Finally, the officers who picked him up in the first place came back and said they were going to let him go, they just wanted to get his pedigree information (name, address, etc., usually taken during an arrest). But while they did that, one of the cops frisked him, finding the knife that Naz stupidly still had on him. That frisk was totally illegal. Searches are usually done as part of an arrest, in order to make sure the suspect doesn’t have any contraband or weapons on them. It’s for the officer’s safety. There was no reason to search a kid who had been waiting in the station all night, as he was in the process of being released. The Fruit of the Poisonous Tree doctrine would suggest that the knife would not be admissible as evidence.

But it gets slightly trickier. While Naz was being patted down, immediately before the knife was found, the neighbor tells a detective that the man he saw leaving Andrea’s home drove a taxi. This led the officer who was searching Naz to be suspicious of him, and when she found the bloody knife at that moment, Naz became a suspect. At that point, the police were within their right to ask him questions.

There is an exception to the Fruit of the Poisonous Tree doctrine that says that if evidence obtained illegally would have eventually been obtained legally, then it’s still admissible. The cops would have had reason to detain Naz at that point. However, Naz should have been released beforehand, and he would have been gone before anyone made the taxicab connection. By then, he probably would have ditched the knife, although it’s hard to say, because I don’t know why he held onto it in the first place.

This one is questionable, but at the very least, there was a break from standard protocol. After Naz’s clothing and the knife were collected as evidence, they were bagged up and sent out, but not by the officers who normally perform that task. When the officer who normally handles evidence found out, he even called out the other, saying, “You always break the chain of evidence like that?” Chain of evidence is the record of custody that evidence is in, used to show that it hasn’t been tampered with. The other officer made it clear that he followed procedure, filling out a voucher for each them, but he then gave the stuff to another officer who doesn’t normally handle evidence. There may not have been any actual wrongdoing, but it was clearly not standard procedure, which can, and likely will, be used against the police later on.

There was plenty more controversial activity, but a lot of it had to do with Naz being stupid, talking when he didn’t have to, and consenting to searches and tests that he didn’t have to. A lot of that was a result of police pressure and lies, but the fact that they were so insistent on getting his actual consent to do things like scrape under his fingernails should have tipped him off. Detective Dennis Box (Bill Camp) and other officers played the appearance card, saying that it won’t look good to a jury if Naz doesn’t do whatever the cops want. There’s not much he could have done to prevent illegal police activity, because he didn’t have to answer questions. He certainly didn’t have to spontaneously say, “Is she dead?” when he was in the back of the squad car when no one even mentioned that there was a “she” in the first place.

Let this be a lesson: if you’re in police custody, get a lawyer and shut up.