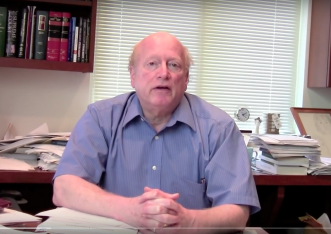 With the death of Antonin Scalia, Harvard law professor Mark Tushnet says liberal lawyers and judges no longer need to temper their arguments out of fear of being overturned by the Supreme Court.  This is especially true in the area of “Culture War” issues, he writes in a recent post on the Balkinization blog.  According to Tushnet, that war is over and it time to treat the “losers” — conservatives, people of faith or anyone not on board the Tushnet train — the same way the Allies treated the Nazis after World War 2.

You might think I am exaggerating a bit.  Well, I am not.

The culture wars are over; they lost, we won. Remember, they were the ones who characterized constitutional disputes as culture wars (see Justice Scalia in Romer v. Evans, and the Wikipedia entry for culture wars, which describes conservative activists, not liberals, using the term.) And they had opportunities to reach a cease fire, but rejected them in favor of a scorched earth policy. The earth that was scorched, though, was their own. (No conservatives demonstrated any interest in trading off recognition of LGBT rights for “religious liberty” protections. Only now that they’ve lost the battle over LGBT rights, have they made those protections central – seeing them, I suppose, as a new front in the culture wars. But, again, they’ve already lost the war.). For liberals, the question now is how to deal with the losers in the culture wars. That’s mostly a question of tactics. My own judgment is that taking a hard line (“You lost, live with it”) is better than trying to accommodate the losers, who – remember – defended, and are defending, positions that liberals regard as having no normative pull at all. Trying to be nice to the losers didn’t work well after the Civil War, nor after Brown. (And taking a hard line seemed to work reasonably well in Germany and Japan after 1945.) I should note that LGBT activists in particular seem to have settled on the hard-line approach, while some liberal academics defend more accommodating approaches. When specific battles in the culture wars were being fought, it might have made sense to try to be accommodating after a local victory, because other related fights were going on, and a hard line might have stiffened the opposition in those fights. But the war’s over, and we won.

There are so many things to say about Tushnet’s argument here, from citing Wikipedia to essentially argue “they started it,” or his Donald Trump-esque “loser” label.  But what really stands out the part about treating those that do not agree you on these issues as the functional equivalent of Nazis and racists.  To call that extreme is an understatement.