Ginsburg Hopes Senate Acts on Garland ‘Sooner Rather Than Later’ 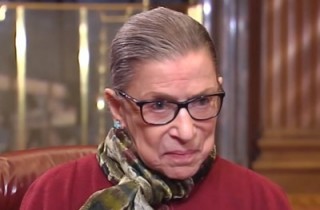 U.S. Supreme Court Justice Ruth Bader Ginsburg spoke to an audience at Georgetown Law Center on Wednesday, and addressed the still-vacant seat on the high court left by the late Antonin Scalia. Ginsburg said that while the Senate is not obligated to confirm current nominee Merrick Garland, they should at least make a decision regarding the man President Barack Obama nominated back in March.

“The president is elected for four years, not three years,” Ginsburg remarked, saying that the Senate should act, even though Garland was nominated in Obama’s final year in office. She hopes that Republican Senators, who have vowed not to make any decision until the next president takes office, will come around “sooner rather than later.”

Earlier the same day, Senate Democrats held a press conference outside the Supreme Court building, calling for movement on the issue. Justice Ginsburg said that while the two parties have been at an impasse for some time, she thinks “cooler heads will prevail.”