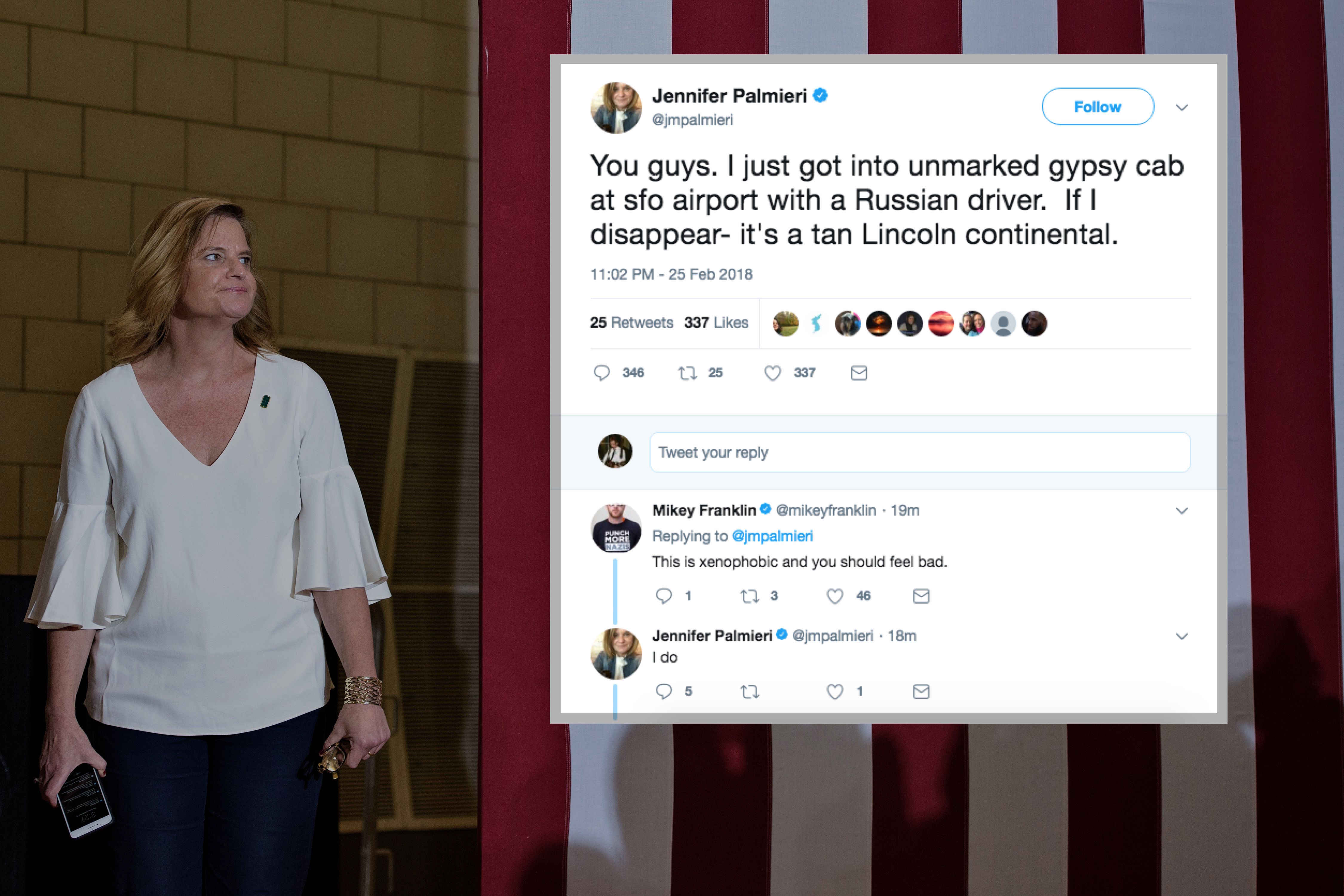 Former Clinton campaign official Jennifer Palmieri was dragged on Twitter on Monday after posting an update widely interpreted as xenophobic in general and Russophobic in particular.

After apparently disembarking from a red eye flight this morning, at 2:02 a.m. Palmieri tweeted:

You guys. I just got into unmarked gypsy cab at sfo airport with a Russian driver. If I disappear- it’s a tan Lincoln continental.

The Twitterati immediately seized upon Palmieri’s anti-Russian sentiment and chastised her for it.

Campaign organizer Mikey Franklin was the first to respond. He said, “This is xenophobic and you should feel bad.” To which Palmieri responded, “I do.” Franklin later asked, “Maybe delete the tweet then?” Palmieri didn’t directly respond to this suggestion but later did, in fact, delete her tweet. (Palmieri attempted to excise this statement from the internet while this article was in progress; for posterity Law&Crime took a screenshot of the tweet before it was removed.)

This is xenophobic and you should feel bad.

Josh Lamont, a strategist and former Barack Obama appointee to The Foundation for AIDS Research is half-Russian and one of Palmieri’s former employees. He was none too pleased with the tweet either, writing:

J’adore u @jmpalmieri — genuinely a professional role model. But “gypsy” cab? Russian drivers? Funny-not-funny for this part-Romanian/part-Russian former employee of YOURS

J’adore u @jmpalmieri — genuinely a professional role model. But “gypsy” cab? Russian drivers? Funny-not-funny for this part-Romanian/part-Russian former employee of YOURS

Other users–mostly of the blue-check and rose emoji-variety–slammed Palmieri for being her use of “racial slurs” and for being a poorly chosen representative of the Democratic Party.

As noted above, Palmieri deleted the tweet without explanation while this article was being compiled. Some of the criticism to her comment can be viewed here, here and here. Law&Crime reached out to Palmieri for comment on this story, but no response was forthcoming at the time of publication.

Palmieri’s seemingly jocular commentary has gotten her in trouble before.

Implicated by the Wikileaks release of Democratic National Committee emails at the height of the 2016 presidential campaign, Palmieri’s alleged comments about religious people drew heavy criticism and created a minor campaign kerfuffle for the ultimately unsuccessful Clinton presidential bid.