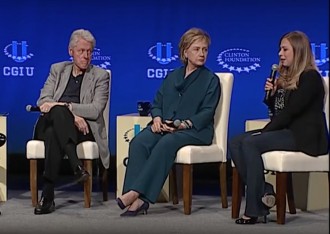 Hillary Clinton has her own disclosure problems with a state attorney general’s office that dwarfs anything close to the $25,000 donation Donald Trump made in 2013 to a group affiliated with Florida Attorney General Pam Bondi. A three month long investigation by the Scripps News Washington Bureau published on Tuesday revealed Clinton family charities have ignored New York state law requirements to publicly disclose the identity of each foreign country and the amount it donates in filings available from 2010-2014. In one example, the report found the failure to properly disclose donations has led to a $225,000,000 discrepancy between what a Clinton charity told the IRS and what it filed with New York state regulators.

All the while, the New York Attorney General’s Office has had the power to enforce the disclosure requirements but apparently has neglected to do so.  It just so happens that during the relevant time period, that office has been occupied by Eric Schneiderman, a Democrat, Clinton donor and member of the Clinton campaign’s “leadership council” in the state.

As the report states, “Schneiderman’s failure to require compliance with New York law and written instructions from his own office keeps the public in the dark about whether the foreign governments that gave money to the Clinton charities also had special access to Hillary Clinton when she was secretary of state….”

In 2010, as a part of deal with the Obama White House upon her appointment to Secretary of State, the Clinton Foundation split off several of its projects into separate entities.  The relevant entity in this case being the Clinton Health Access Initiative (CHAI).  In its 2010 annual filing, CHAI reported to the state of New York that it had received $242,099 in government grants, all from domestic sources.  Yet, it told the IRS in 2010 it received $26,740,319 in foreign and domestic grants.

CHAI also reported the amount of grants it received to the state as a lump sum.  While the lump sum reporting method is all perfectly fine for federal disclosures, New York requires a charity to publicly disclose much more information.  Most notably, the state requires a charity to individually list the identity of the governmental contributor and the amount of each contribution.  In other words, the lump sum totals do not cut it under the state requirements.

(c) What documents to submit.
The following documents constitute a complete annual filing for a charitable organization:

Presumably to make an arguably complicated process easier, the Office of the Attorney General (Schneiderman’s office) also publishes a very detailed set of instructions  of what must be included in a charity’s annual filing.  The relevant part states:

Despite the apparent clarity of the requirements, the report found CHAI has failed to separately list out its contributors in its filings every year between 2010-2014.  Furthermore, it has failed to list its foreign contributions as well.  The result is a $225,000,000 gap between what CHAI has told the IRS it received and what it revealed to the state of New York.

Schneiderman’s official website bio says “he believes there has to be one set of rules for everyone, no matter how rich or powerful,” but his actions with respect to the Clintons and their charities appear to tell a different story.

Nowhere is Schneiderman’s two-tiered approached better highlighted than in his recent win against the right wing group Citizens United.  The issue in that case?  Forcing the group to “reveal the names, addresses and contribution amount from donors before soliciting state funds — as charitable organizations are required to disclose,” as the New York Post recently reported.

Of course, Scripps asked all three entities involved for comment — you can decide which one is more laughable than the next.

First, CHAI spokesperson Regan Lachapelle took the very Clintonian approach of blaming the other guy, saying it is the Attorney General’s fault for not asking for more information.

“We clearly state in our [2014 letter referenced above] that we would provide details on funding from international governments upon request,” Lachapelle said.  Speaking to the lump sum listing of the contributions, she added, “The officials in New York have never questioned our way of doing this.”

Brian Cookstra, director of media relations for the Clinton Foundation, simply did not directly address questions about the lump sum listing practice.  He then referenced a Politifact article written in June in which an attorney general’s office spokesman basically said other people have done the same thing with respect to the lump sum listing of foreign donors.  The Clinton Foundation also claims to have provided the attorney general’s office with a list of major donors, but that is kept from public view.

Both groups also point to their websites which do include a broad listing of the identities of contributors and a range of the amount each donated, over time.  However, there is no year-by-year listing available.

Finally, a spokesman with the Attorney General’s Office, referred reporters to what the office said in the the same Politifact article mentioned by the Clinton Foundation.  Then, in what can reasonably be interpreted as an effort to give the Clinton’s an out in all of this, a spokesman added, “We intend to provide guidance clarifying our disclosure rules in the months ahead.”

Now, you go read those regulations listed above again and tell me what needs to be clarified.