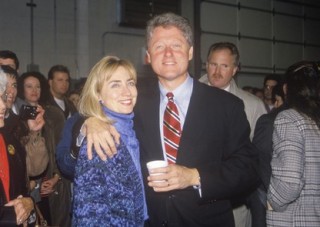 Ex-Secret Service agent Gary Byrne, who served in the White House during President Bill Clinton‘s administration, is firing shots at the former first family in an upcoming book about his experiences. In Crisis of Character, Byrne, a 29-year military and law enforcement veteran, discusses his time protecting the President, and the various scandals he witnessed, and allegedly helped cover up.

“I had no animosity towards the Clintons,” he writes. “Out of a sense of loyalty to our First Family I even secretly disposed of sordid physical evidence that might later have been used to convict the president.” Of course, the lack of animosity seems to be gone, as the whole book appears to be geared towards convincing voters that the Clintons should never be allowed in the White House again. He comes right out and says, “Hillary Clinton is now poised to be the Democratic nominee for President of the United States, but she simply lacks the integrity and temperament to serve in the office.” He criticizes both Bill and Hillary’s general attitude towards governing, saying, “The Clintons treat running the free world like a damn part-time job.”

Byrne insists in the book that his writing is not politically motivated, which raises the question of why it’s being released on June 28, roughly a month before the Democratic National Convention, as the country will be gearing up for the general election. Should Clinton not have the nomination locked up with pledged delegates by then, unpledged superdelegates will have plenty of time to look it over.