Feds Will Regulate E-Cigarettes Like All Other Tobacco Products 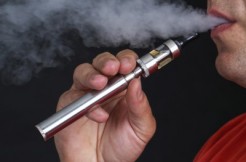 In a rule issued on Thursday, the U.S. Food and Drug Administration said they’d regular e-cigarettes and other trendy smoking products pretty much like traditional cigarettes.

All unregulated tobacco products that hit stores after February 2007, which the Tobacco Control Act of 2009 doesn’t regulate, will now be covered. The rule also covers hookah, pipe tobacco, and premium, hand-rolled cigars. Like with cigarettes, the covered products are restricted to adults 18 and older. Purchasers must show a photo ID. Mandatory health warnings will be included on packages and advertisements. Free-samples are prohibited.

It’s a big financial blow to manufacturers, who must pay at least $1 million each time they apply to get a specific product authorized.

“At last, the Food and Drug Administration will have basic authority to make science-based decisions that will protect our nation’s youth and the public health from all tobacco products, including e-cigarettes, cigars and hookah,” Harold P. Wimmer, president of the American Lung Association, said in a statement.

E-cigarette opponents tried, and failed to ban flavored products, too, according to The New York Times. They worry such items attract minors to smoking.

The new reform goes into effect in 90 days.