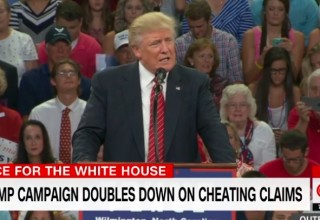 If you are interested in election law, one of the best election law blogs in the country is the website of University of California-Irvine School of Law Professor Rick Hasen. He is usually quite measured in his legal analysis, and he is an expert on voter fraud. But, he could not help but chastise CNN for their misleading coverage of voter fraud issues as they relate to statements made by Donald Trump recently. The report comes after Trump’s recent remarks that Clinton would have to “cheat” in order to win Pennsylvania. Trump even went on to say that “We have to call up law enforcement. And we have to have the sheriffs and the police chiefs and everybody watching.” Some have contended this could amount to illegal voter intimidation. Hasen has been very critical of Trump’s statements about voter fraud, but now, also, CNN’s coverage of the important issue.

Here is the report CNN aired that he as a problem with:

Hasen said the CNN set a “false frame” about voter fraud in this country. He wrote:

They (CNN) quote Trump’s dangerous and irresponsible (and borderline racist) comments about cheating being used to steal the election in Pa, and then when they ask if there is any evidence to support this, they point to a Pew report on bloated voter rolls, AS IF bloated voter rolls prove people are voting 5, 10, or 15 times as Trump has claimed (and as I’ve debunked). And the story sets a false frame, by saying not—this cheating is impossible in this way, but that voter id laws discriminate against minority voters.

Trump contends that without strict voter identification laws, people can vote five, 10 or 15 times. He’s offered no evidence to back up this assertion, and for good reason. Even in states with modest means of identifying voters, such as comparing voters’ signatures in the poll ledger and on registration forms, there are safeguards to ensure against multiple voting.

In his blog post, Hasen adds that CNN’s on-air coverage of this issue has been “very disappointing.” He did say CNN’s articles on this and other issues have been better.