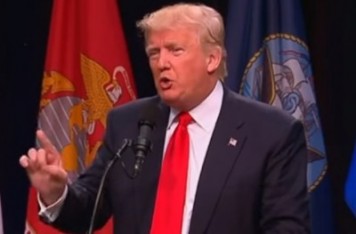 A defamation case currently before the Supreme Court could potentially be used as the vehicle to, in the words of Donald Trump, “[O]pen up our libel laws.”

The National Law Journal reports if the Supreme Court grants certiorari to take up  Armstrong v. Thompson, it will be the first time in decades the nation’s high court has an opportunity to reexamine the holding in New York Times v. Sullivan. In the landmark 1964 Sullivan case, the Supreme Court held the First Amendment protects media outlets even when the print false statements about public officials, so long as they did not act with “actual malice.”  Under this standard, it is incredibly difficult for public officials to bring successful lawsuits for libel and defamation.

Here is how the NLJ describes the Armstrong case:

William Armstrong, a former low-level criminal investigator for the U.S. Treasury Department, is challenging a lower court ruling that placed him in the category of “public official,” for whom the Times case made defamation suits hard to win. The ruling effectively blocked Armstrong’s defamation suit against Karen Thompson, a fellow worker whose anonymous complaints about him caused him to lose his job.

Armstrong’s attorney, Roy Englert Jr., says he is asking the Supreme Court to determine whether “a garden-variety law enforcement officer, with little or no role in setting public policy, must establish ‘actual malice’ to succeed on the claim against Thompson.

According to Englert, however, this is a question that stops short of directly challenging the holding in Sullivan.

“Our view is that the expansive definition of public officials adopted by some lower courts is something the Times v. Sullivan court never had in mind,” Englert told the NLJ.

Victory in this case, he asserts, would only enable low-level officials without “policy-making” or “public-facing” duties to bring defamation suits without having to prove actual malice.

Yet, University of Washington law professor and First Amendment scholar Richard Collins told the NLJ a victory for Armstrong could extend well beyond simply low level officials.  What Collins seems to be implying here is a favorable ruling for Armstrong could be simply the first in a series of cases that chip away at the precedent set in the Sullivan case.

Which brings us back to Donald Trump.

In a series of high-profile comments and tweets over the past few months, Trump has suggested that he would push to change libel laws.  For example, at a rally in Texas in February, Trump said:

One of the things I’m going to do if I win, and I hope we do and we’re certainly leading. I’m going to open up our libel laws so when they write purposely negative and horrible and false articles, we can sue them and win lots of money. We’re going to open up those libel laws. So when The New York Times writes a hit piece which is a total disgrace or when The Washington Post, which is there for other reasons, writes a hit piece, we can sue them and win money instead of having no chance of winning because they’re totally protected.

Trump’s comments on this issue have been largely dismissed (except by his most fierce critics), with most media outlets believing it would never happen because they have been protected for the last 50-plus years by the Sullivan decision.

But journalists should not take these protections for granted because there is no guarantee they will remain in place if the Supreme Court takes up the matter again.

In fact, had this matter come before the Supreme Court before Judge Scalia passed away, Prof. Collins appears to believe he would’ve pushed hard to take up the case.

“This is the case that could have been the vehicle that Justice Scalia used to raise some of his views about defamation. Scalia would have wanted to grant it,” Prof. Collins said.

Scalia apparently often pointed to NY Times v. Sullivan anytime he was asked what precedent he wanted to overturn.

In a 2012 interview with Charlie Rose, here is how Scalia summarized the holding in Sullivan: “You can libel public figures at will so long as somebody told you something, some reliable person told you the lie that you then publicized to the whole world — that’s what New York Times v. Sullivan says.”

Scalia added, “Nobody thought that libel, even libel of public figures, was permitted, was sanctioned by the First Amendment” at the time it was adopted, Scalia said in a 2012 interview. “Where did that come from? Who told Earl Warren and the Supreme Court that what had been accepted libel law for a couple hundred years was no longer accepted?”

While it is true Scalia is no longer on the Court, the possibility always remains that five judges may one day agree to overturn Sullivan — and Court historians might someday trace the opening up of our libel laws back to the ruling in Armstrong.