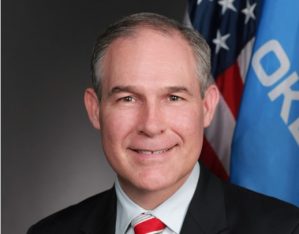 The vast majority of Senate Democrats and at least one Republican senator, Susan Collins, have announced their intention to oppose the nomination of Scott Pruitt to serve as the head of the Environmental Protection Agency.  One of the main reasons behind the opposition to Pruitt is that he filed multiple lawsuits against the EPA while serving as Attorney General of Oklahoma that argued the agency was guilty of federal overreach.  The lawmakers argue the lawsuits create a conflict of interest for Pruitt to now lead the agency he tried to sue.  The Senate is currently scheduled to vote on his nomination on Friday afternoon.

In a letter written late last month, the Campaign Legal Center first brought these concerns to light when they called on Pruitt to recuse himself from involvement in multiple lawsuits he initiated against the EPA during his term as Oklahoma Attorney General.

The letter, authored by CLC General Counsel Lawrence Noble, says Trump EPA pick Scott Pruitt’s proposed ethics agreement is insufficient to ensure compliance with 5 C.F.R. Section 2635.101(a) that requires he take steps to “ensure that every citizen have complete confidence in the integrity of the federal government.”

The group’s problem stems from Pruitt’s involvement as Oklahoma Attorney General in at least 26 lawsuits against the EPA, nine of which the group says are still active cases.

“Pruitt made a name for himself by suing the same agency he now seeks to lead, and if confirmed, he will be in a position of defending against—or settling—the same cases he previously initiated and supported,”  Noble said in a statement obtained by LawNewz.com. “Pruitt can’t be an impartial administrator when it comes to the lawsuits he spearheaded and as EPA Administrator he must step aside from those suits to protect the integrity of the agency’s decision making.”

Pruitt’s proposed ethic’s agreement requires that he recuse himself from involvement in the lawsuits for one-year.  The group says this is an insufficient time-period to avoid any actual or apparent conflicts of interest in lawsuits he initiated against the group.

The CLC suggests Pruitt should be considered a “covered employee” under the federal regulations “impartiality rule” who must required to recuse himself from involvement in litigation against the agency he hopes to lead.

A version of this article was first published on January 18th, 2017.