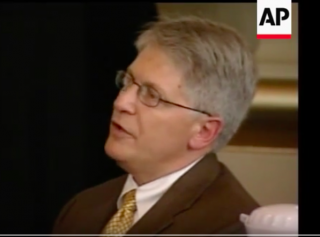 This flew under the radar until being picked up Thursday by The Chronicle (Duke University’s independent daily newspaper), but Mike Nifong, the disbarred former Durham County, North Carolina prosecutor who helmed the Duke lacrosse team rape case, is back in the news. As Raleigh, NC’s WRAL TV reported last month, Nifong and a police detective are accused of witholding exculpatory evidence from the defense in the 1995 murder trial of Darryl Anthony Howard.

Howard was accused of killing Doris Washington and her 13 year old daughter, Nishonda, in 1991, and has been represented by The Innocence Project in his appeal. WRAL’s report stemmed from a pre-hearing conference between both sides coming out of an April ruling demanding that the prosecution show evidence that supports holding up the conviction. Barry Scheck, co-director of The Innocence Project, told WRAL that “Not only did we have DNA testing, which we believe proves Mr. Howard’s innocence, but also we think we have, we’ve alleged egregious prosecutorial misconduct.”

To get the specifics of what the defense is alluding to, you have to go back to reports from 2014, which is when the order for a new trial came down. A couple months before the ruling, The Washington Post did an extensive feature on the case and The Innocence Project’s interest in it. At the time, Scheck made it clear that Nifong’s actions in the Duke lacrosse case shed a light on his entire prosecutorial history. “When you see that kind of misconduct once, it has likely happened before,” he explained. “Behavior that egregious is typically the work of a serial offender.”

In The Innocence Project’s motion for appropriate relief (PDF) filed at the time, it’s explained that the rape kits done on both victims found DNA that did not belong to Howard. The sample found on the mother came from a convicted felon found in the FBI DNA database, while the sample from the daughter’s rape kit did not have any matches, including Howard. This tip from an informant was also not turned over to the defense:

Reference Double Homicide\Arson Phew [sic] Gardens. Informant advised me that subjects were probably murdered because mother owed $8,000.00 to to [sic] drug dealers from either Philadelphia or New York.

Informant stated that many residents in Phew [sic] Gardens were offered two thousand-dollars a week for use of their apartment but apparently not many accepted. Informant further stated that perpetrators were believed to have left 4 bags of drugs in the apt. and apparently found some contents missing when they came for them. The perps. then told the victim/tenant she owed them eight- thousand dollars. When perps. came for the money they first raped her before strangling her. The 13 yr. old daughter may have unknowingly walked in on the seen [sic] so then killed her.

A hearing about this is scheduled for late August, according to WRAL. As for Nifong (who was also charged with contempt of court for making false statements to the judge in the Duke case), if you want the full details of his disbarment, the order of discipline in his case can be found at the North Carolina State Bar’s website (PDF). Said details include:

And much more. If you want a good understanding of the Duke lacrosse case, it’s a must-read.