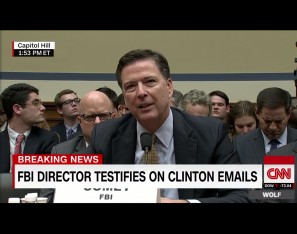 FBI Director James Comey testified on Thursday before Congress about his decision to recommend that Hillary Clinton should not be criminally prosecuted for her use of a private email server while serving as Secretary of State.  Here are the most revealing moments from FBI Director Comey’s testimony, in no particular order:

1)“Gross Negligence” was not a key determination in deciding whether to bring charges in this case:

The FBI Director explained that the statute with “gross negligence” was never really considered in this case because of a fear at the Department of Justice that it was possibly unconstitutional.  In his opening statement Comey stated:

There was a statute passed in 1917 that on its face makes it a crime, a felony, for someone to engage in gross negligence. So, that would appear to say … maybe it’s enough to prove they were just really careless beyond a reasonable doubt. At the time Congress passed that statute in 1917, there was a lot of concern in the House and Senate about whether that was going to violate the American tradition of requiring that before you’re going to lock somebody up, you prove they knew they were doing something wrong…. As best I can tell, the Department of Justice has used it once in the 99 years since, reflecting that same concern. I know from 30 years with the Department of Justice they have grave concerns about whether it’s appropriate to prosecute somebody for gross negligence, which is why they’ve done it once … in a case involving espionage.

Later in his testimony Director Comey expanded on these concerns and said there was a fear that the statute is unconstitutional.

2) Hillary Clinton was not “sophisticated enough” to understand the classification system:

“That information you found, would somebody sophisticated in those matters, should this have been obvious, that was very sensitive information?” Congressman DeSantis asked.

“I just want to take one of your assumptions about ‘sophistication,’” Comey said. “I don’t think our investigation established she was particularly sophisticated with respect to classified information and the levels and treatment.”

“Isn’t she an original classification authority though?” DeSantis asked.

3) Congress will submit a referral to the FBI asking for an investigation into whether Hillary Clinton lied under oath:

Early on during Committee Chairman Jason Chaffetz’s opening questions, he asked Director Comey if the FBI investigated whether Hillary Clinton lied under oath while she testified at the Benghazi hearing.

“Did you review the documents where Congressman Jim Jordan asked her specifically, and she said ‘There was nothing marked classified on my emails either sent or received.’ … Did the FBI investigate her statements under oath on this topic?” Congressman Chaffetz asked.

“Not to my knowledge — I don’t think there has been a referral from Congress,” Director Comey replied.

“Do you need a referral from Congress to investigate her statements under oath?” Congressman Chaffetz asked.

“Sure do,” Comey replied.

4) Director Comey made it clear that any other government employee who did this would face serious consequences:

In his statement on Tuesday, Director Comey said, “[This] is not to suggest that in similar circumstances, a person who engaged in this activity would face no consequences. To the contrary, those individuals are often subject to security or administrative sanctions.”

He was asked to follow up on this statement more than a few times during the hearing.  While he was generally hesitant to comment on hypotheticals, Director Comey left no doubt that any other government employee who did something similar to Clinton would immediately be sent to a “suitability review” process to determine their fitness to hold a clearance.  He also said that a person would be subject to a number of other consequences, ranging from a suspension to termination and prohibition from future in employment in the United States government.

5) Hillary Clinton’s lawyers did not have security clearances when they sorted through her classified emails:

Congressman Jason Chaffetz asked Director Comey whether Hillary Clinton’s attorneys had the required security clearances necessary to view classified material.  As Clinton has stated numerous times, she retained several attorneys to help her sort through her emails to determine what was work-related before turning them over to the State Department.

6) Director Comey refused to comment on the existence of a second FBI investigation into the Clinton Foundation:

Earlier this year, reports surfaced that federal investigators had expanded the probe to include possible “pay for play” allegations between the State Department and the Clinton Foundation. Director Comey was asked about this in the latter part of his testimony, but he declined to answer the question.

“I’m not going to comment on the existence or non-existence of any other investigations,” Director Comey said.

“Was the Clinton Foundation tied to this investigation?” congressman Chaffetz asked.

“I’m not going to answer that,” Comey replied.