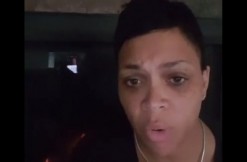 Nakia Jones, an officer for the Warrensville Police Department in Ohio, took to Facebook on Wednesday to blast her fellow officers for the way they treat black people.

“If you’re that officer who knows good and well you’ve got a God complex, if you’re afraid of people who don’t look like you, you have no business in that uniform,” Jones, who is black, said. “Take it off. You have no business being a police officer.”

She’s outraged because of the shooting death of 37-year-old Alton Sterling by police. That incident happened Tuesday morning in Baton Rouge, Louisiana. Video of his death was posted online: Sterling is seen struggling with two officers on top of him when shots were fired. Those officers, Blane Salamoni and Howie Lake, are now on paid administrative leave, but no charges have been filed.

That story caught national attention, with The NY Daily News controversially put an image of Sterling’s body on its cover, and people taking to social media to criticize the officers’ behavior.

In her own video, Jones said her son brought video of Sterling’s death to her attention.

“So I’m looking at it, and I became so furious, and so hurt because it bothers me when I hear people say, ‘Y’all police officers this, y’all police officers that,’ and that put us in this negative category when I’m saying to myself, ‘I’m not that kind of police officer,’” she said. “I know officers like me who’d give their lives for other people.” But Lake said she understood the frustration people had with allegations of violent police misconduct. “If I wasn’t a police officer, if I wasn’t on the inside, I would be saying, ‘Look at this racist stuff. Look at this.’”

Jones blasted racist cops, saying they didn’t mean it when they took their oath to serve and protect.

“Because there’s many of us who that would give our lives for anybody, and we took this oath and we meant it,” she said. “If you are an officer that is prejudiced, take the uniform off and put the KKK hoodie on.”
–