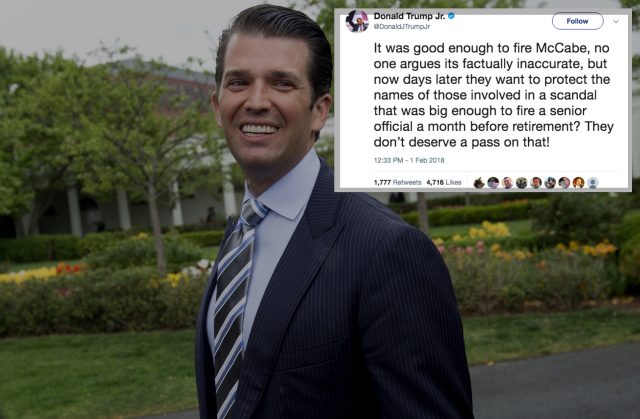 Trump the Younger’s claims, if true, contradict the official narrative that McCabe himself made the decision to exit the FBI a month ahead of his scheduled retirement. Perhaps more importantly, and again if true, the claims hint to the likely explosive nature of the Nunes surveillance memo itself.

On Thursday afternoon at 12:33 p.m., the eldest presidential son tweeted:

It was good enough to fire McCabe, no one argues its [sic] factually inaccurate, but now days later they want to protect the names of those involved in a scandal that was big enough to fire a senior official a month before retirement? They don’t deserve a pass on that!

Trump Jr.’s tweeted comments regarding McCabe’s alleged firing wasn’t the first such statement he made to that effect. Earlier on Thursday, at 11:31 a.m. he tweeted:

This is getting scary. So McCabe got fired because of it and no one who has seen it (including FBI) seems to doubt the validity of it but now the people who help unmask private citizens want to mask the perpetrators identities? Do I have that right? Insanity.

Trump Jr.’s above-quoted comments were in reference to telegraphed concerns from multiple Republican members of congress and conservative pundits of various stripes that the Nunes surveillance memo may only see the light of day in strongly-redacted form.

(Explanatory note: The Nunes surveillance memo, of #ReleaseTheMemo fame, was prepared by House Permanent Select Committee on Intelligence (“HPSCI”) Chairman Devin Nunes (R-CA) and based off of a much longer Foreign Intelligence Surveillance Court (“FISA Court”) application. The memo is alleged to contain evidence that Obama administration officials unlawfully abused the FISA law in order to surveil Trump and certain members of the president’s campaign staff.)

Those redaction concerns became palpable after reports that Deputy Attorney General Rod Rosenstein was lobbying the Trump administration to reconsider releasing the Nunes surveillance memo. Such concerns reached a fever pitch Thursday after FBI Director Chris Wray issued a strong statement against the release of the memo in full.

Trump Jr. directly addressed those competing concerns in another tweet sent at 12:26 p.m. He wrote:

The FBI reaction to the memo is Indicative of a lot. All of congress has seen it, not just the special committees. Also weird that for the first time ever the media wants less info? What are they hiding?

#releasethememo and not the nonsense redacted version to protect the perpetrators. People need to see who is involved and at what level if we want to stop this from happening in the future.