Democrats Vote to Bind Most Superdelegates in Move Towards Party Unification 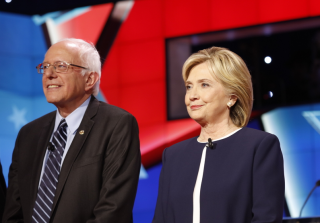 The Rules Committee for the Democratic National Convention voted on rules Saturday night, and approved an amendment that could bring significant change to the party’s Presidential nomination process. The new rule would bind nearly two thirds of Democratic superdelegates, who under current rules can vote for whichever candidate they like, regardless of primary results.

The proposed rule, obtained by ABC’s Mary Alice Parks, would form a “Unity Reform Committee,” which would tackle a number of issue, including superdelegates. While the rule has already gained the support of the Rules Committee with a 158-6 vote, next the DNC has to formally approve it, and even then, it wouldn’t take effect until the next Presidential election in 2020.

It still wouldn’t eliminate all unbound delegates, however. Governors, members of Congress, and Democratic party leaders, who make up about a third of the current superdelegates, would still be free to vote for their personal choice under the new rule.

The Unity Reform Commission, would be comprised of 21 members, seven of whom would be selected by Senator Bernie Sanders. Hillary Clinton would select nine, and the balance would be chosen by the DNC chair. Sanders’s chief of staff Michaeleen Crowell said that discussions between the Sanders and Clinton camps resulted in the arrangement, The Hill reported.

New York delegate and Sanders supporter Arthur Cheliotes spoke of the need for the party to come together, as they head towards the general election. “We have our differences like any family we have our differences, but here comes a time where we have to hang together or we’ll hang separately.”