Football Player Stopped by Cops With Guns While Playing Pokémon: ‘I am Thankful to Be Alive’ | Law News
$promoSlice() doesn't exist!

Football Player Stopped by Cops With Guns While Playing Pokémon: ‘I am Thankful to Be Alive’ 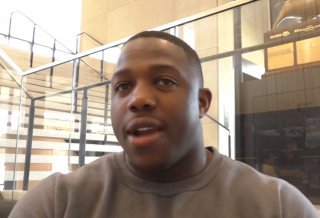 A college football player was listening to headphones and playing Pokémon Go when suddenly, he was surrounded by police officers, guns drawn and pointed at him. In a Facebook post, University of Iowa senior Faith Ekakitie described the encounter from his perspective, while understanding the actions of the officers, whom he said handled the misunderstanding “professionally.”

Ekakitie was walking with his headphones blasting while playing the mobile game that has swept the nation, too distracted to realize that a group of Iowa City Police officers were following him. The music in his ears kept him from hearing the officers’ orders to stop, or them identifying themselves as police in the first place. The next thing he knew, the cops were surrounding him with their weapons drawn, and they searched his waistband, pockets, and backpack.

While Ekakitie, a defensive lineman for the Iowa Hawkeyes, “feared for [his] life,” he also recognized what the officers were probably thinking. Ekakitie said he was at a park, a short distance from a bank which had just been robbed by a suspect whose description matched his own appearance on that night. Sgt. Jorey Bailey of the Iowa City Police Department confirmed this to ESPN. Ekakitie imagined the police’s perspective as:

From the police officers point of view, all they knew was that a bank had just been robbed less than ten minutes ago. The suspect was a large black male, wearing all black, with something on top of his head and the suspect is armed. As they drive past an Iowa City park that was less than 3 minutes away from the bank that was just robbed, they notice a large black man, dressed in all black, with black goggles on his head. They quickly move to action and identify themselves as the Iowa City police and ask me to turn around and place my hands up. I do not comply, they ask again, and again no response from me. So they all draw their guns and begin to slowly approach the suspect.

He goes on to say that when he reached into his pocket for his phone, the officers may have feared he was reaching for a gun. Ekakitie “thank[ed] the Iowa City Police department for handling a sensitive situation very professionally,” saying he could have become “another statistic,” referring to recent victims of police shootings. “I am thankful to be alive … [m]isunderstandings happen all the time and just like that things can go south very quickly.”

Ekakitie lamented the state of society, that has gotten “to the point where we can’t feel safe being approached by the police officers.” He blamed the media for fueling perceptions. “Not all police officers are out to get you, but at the same time, not all people who fit a criminal profile are criminals.”