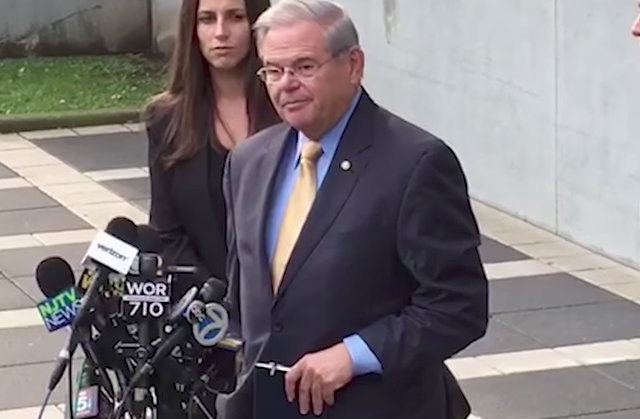 NEWARK, N.J. (AP) — The Latest on the bribery trial of Sen. Bob Menendez and a wealthy friend (all times local):

A jury has begun deliberations in the bribery and fraud trial of U.S. Sen. Bob Menendez and a wealthy friend.

The New Jersey Democrat is charged with accepting gifts from Florida eye doctor Salomon Melgen (MEHL’-genn), a longtime friend, in exchange for pressuring officials on behalf of Melgen’s business interests.

Both men have denied any wrongdoing.

He said the government’s case was built on assumptions and speculation.

In a rebuttal summation, a prosecutor accused the defense of using a strategy of “distraction and misdirection.”
___

A lawyer for Sen. Bob Menendez says prosecutors showed no evidence of a corrupt agreement between the Democratic lawmaker and a wealthy friend.

The bribery trial is in its 10th week, and jurors could begin deliberating Monday after Menendez attorney Abbe Lowell finishes his closing argument and prosecutors give a rebuttal.

Menendez is charged with accepting gifts from Florida eye doctor Salomon Melgen in exchange for pressuring officials on behalf of Melgen’s business interests. Both men have denied any wrongdoing.

Lowell told jurors that Menendez and Melgen were longtime friends who didn’t suddenly enter into a bribery agreement in 2006, as an indictment alleges.

He says prosecutors never showed evidence of an actual agreement, but instead wanted the jury to “assume, fill in the gap, guess, and speculate about what happened.”
___

A jury could begin deliberations Monday in the bribery trial of U.S. Sen. Bob Menendez and a wealthy friend.

The panel heard closing arguments last week from prosecutors and from attorneys for co-defendant Salomon Melgen. Jurors are scheduled to hear from Menendez’s attorney Monday, followed by the prosecution’s rebuttal.

Menendez is charged with accepting gifts from Melgen, a Florida eye doctor, over a seven-year period in exchange for pressuring government officials on behalf of Melgen’s business interests.

Prosecutors characterized Menendez as Melgen’s “personal senator” who accepted lavish vacations and other gifts and repaid Melgen by pushing executive branch officials to resolve the doctor’s $8.9 million Medicare billing dispute and other issues.

Both men deny any bribery arrangement and say the gifts are reflective of their longtime friendship.