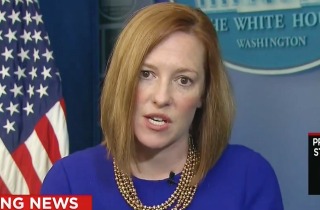 When former State Department spokeswoman Jen Psaki posted a tweet on June 1 about the now infamous edited video of a 2013 press briefing, many accepted the tweet as a straightforward affirmation that she had no knowledge of what happened. But in fewer than 140 characters, we believe Psaki exhibited a cluster of deceptive behaviors that told us just the opposite.

Despite an initial claim that the missing footage was due to a “glitch,” State Department spokesman John Kirby has acknowledged that there had, in fact, been a “deliberate request” to cut the footage, which was related to the Iran nuclear deal. The issue of who approved that request is what led to Psaki’s tweet, and to a subsequent email exchange between Psaki and Fox News chief Washington correspondent James Rosen. That exchange strongly reinforced the conclusion we drew from the tweet: Psaki is very likely withholding information about the events surrounding what has become another high-profile State Department controversy. (The State Department has not identified who is responsible for the edit)

To the general public, Psaki’s June 1 tweet was easily construed as a definitive statement of having been completely in the dark: “I had no knowledge of nor would I have approved of any form of editing or cutting my briefing transcript on any subject while @StateDept.” The problem is that politicians and career bureaucrats, regardless of political or party affiliation, are experts at preying on the untrained eyes and ears of the public, and it’s emblematic of what we see every day in the political environment. So a closer look is warranted.

Our analysis of Psaki’s tweet yielded a wealth of information, beginning with the initial assertion: “I had no knowledge of nor would I have approved of… .” It’s important to understand the nuance here that attaching the phrase “nor would I have approved” to her claim, “I have no knowledge,” suggests it could have been solely the approval that Psaki was claiming to have no knowledge of, rather than the altering of the video itself.

A more glaring deceptive indicator, we believe, followed, with the words, “any form of editing or cutting my briefing transcript.” Reference to her briefing transcript in this context is an overly-specific statement that allowed Psaki to avoid addressing the actual matter at hand: that the video was edited, not the transcript.

Finally, we believe the phrase “on any subject while @StateDept” is a deceptive indictor in the form of what we call a non-specific denial. Behaviorally, it’s much easier for a deceptive person to make a sweeping denial, rather than to deny a specific act. It’s the equivalent of a thief saying, “I didn’t do anything” instead of, “I didn’t steal the money.”

Psaki’s tweet was actually an abbreviated version of a statement she released the same day. In that statement, what she tweeted was followed by the sentence, “I believe deeply in providing the press as much information on important issues as possible.” That, too, was behaviorally significant, in that it’s a convincing statement that’s aimed at casting herself in a positive light, rather than conveying pertinent information about the matter at hand. Moreover, it contains a key unintended message: that some information on important issues is withheld from the press.

Anyone who was inclined to turn a blind eye to all of this likely found it much more difficult to do so after June 3, when Rosen emailed Psaki to politely challenge her on that overly-specific part of her statement.

“Of course, as Liz Trudeau and others have stressed, the briefing transcript remained unaltered the entire time,” Rosen wrote. “Do you want to issue a revised statement, asserting the same for the video, which was altered? Forgive me if you have already put out something along these lines and I missed it.”

In response, Psaki seemed to be grasping at straws.

“My statement applies to the video,” she wrote, “which is considered a form of the transcript and every aspect of this.”

Of course, it’s clearly not the case that the video is a form of the transcript—the fact that the video was altered and the transcript wasn’t, is what led Fox News to bring this to the public’s attention in the first place. But what followed in Psaki’s response was even more damning. Despite the cordiality and respectfulness of Rosen’s inquiry, Psaki responded by lashing out with an intense attack—behavior that, we believe, is an exceptionally strong indicator of deception.

“I understand it is inconvenient for you that I have nothing to do with this,” she wrote sarcastically, “given you have spent the last three weeks vilifying me on television.” And then came the coup de grâce:

“ … without any evidence of my knowledge or involvement and without once reaching out and asking me, but I would encourage you to also ask the State Department if there is any evidence.”

There it was, in the form of an unintended message that we see all too often is cases like this: I’m not culpable, not because I didn’t do it, but because you don’t have any evidence to prove it.

We found it interesting, moreover, that also interlaced with the attack was an instance of speech disfluency: “A shred or any information at all that suggests I had any knowledge of this or any connection to this on any level.” Here we have a professional spokesperson serving at the highest level—Psaki is currently Director of Communications at the White House—who fails to articulate her statement in the form of a complete sentence. This was an official communication—Psaki stated explicitly to Rosen that her email to him was on the record, so we’re unable to dismiss this as a casual exchange. The disfluency is indicative of discomfort with the information being conveyed, and, we believe, a telling indicator of deception.

Psaki concludes her email with a final attack statement: “Hopefully you will find the time to spend on the range of global events happening in the world in between attacking my character.”

When individuals attack in this manner, it’s typically because they feel ensnared by the truth of the situation, and have no alternative but to lash out as a means of getting the questioner to back off. As this instance so clearly demonstrates, it typically is also an effort on the part of the deceptive person to shift the attention elsewhere. No doubt, Psaki desperately wanted that spotlight off of her and onto other events.

We suspect that there’s much more to this story—and to Psaki’s knowledge of it—that will come to light in the days and weeks ahead. That Psaki made such a formidable effort to get Rosen to back off leaves us to ask why that’s the case. And it begs the question of just how high up the decision to alter the video actually goes.