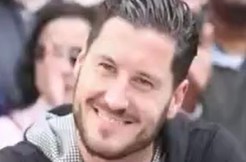 A dancer’s bad form has gotten him into a lawsuit. Val Chmerkovskiy, of Dancing with the Stars, has been sued for defamation and emotional injury by the family of a girl with Down Syndrome.

About three weeks ago, Chmerkovskiy posted a meme featuring the girl, then about 10 years old, drinking a soda. “Letting your kid become obese should be considered child abuse,” the meme read. By the way, the dancer had put the meme on his Facebook account, where he has over 300,000 followers.

The girls’ parents were set off when they learned about the post, and are seeking $6 million in damages. The photographer of the meme’s picture is also being sued for obvious reasons. On top of that, so is CBS News for reposting it.

But the parents’ case is shaky, said LawNewz founder Dan Abrams to Good Morning America. After all, the picture was taken at a baseball game. “It’s a public place. You can take pictures of people at a public place without them having an expectation of privacy.” Plus, the dancer has a right to express his opinion, even if that opinion “isn’t nice.”

And the parents’ claim is shakier when they talk about intentional infliction of emotional stress. “The conduct to win on that kind of claim has to be so outrageous,” Abrams said.  “It has to go to another level to be that tort.” For example, the plaintiff has to lose work or wages. Even if they win, it will be hard for the parents to prove $6 million of damages based on emotional humiliation alone.

Nonetheless, this doesn’t mean you can run around posting whatever you want on Facebook.

“On social media, you’re effectively a publisher now,” Abrams said.  You can still be accused of slander or libel for whatever you post online. Even the stuff you simply repost. “Your defense can’t just be ‘Well, it’s my Facebook page, I can say whatever I want.’ Hey, you can say whatever you want, and someone can sue you for what you said on there.”

Dancing with the StarsDWTSlawsuitVal Chmerkovskiy