Court: ‘Precious Little’ Evidence That Requiring Proof of Citizenship to Vote Would Do Anything | Law News
$promoSlice() doesn't exist!

Court: ‘Precious Little’ Evidence That Requiring Proof of Citizenship to Vote Would Do Anything 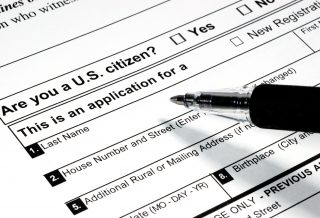 The D.C. Court of Appeals issued an opinion on Monday on a matter involving states requiring proof of citizenship. The federal voter registration form does not demand proof, but it does allow states to request certain requirements of their own. Alabama, Georgia, and Kansas requested that proof of citizenship be required, and a member of the Election Assistance Commission (EAC) granted their requests.

When voting rights groups and two individuals sued, seeking an injunction against the new rule, a U.S. District Court turned them down, saying that the rule didn’t cause irreparable harm. But the Court of Appeals ruled in a 2-1 decision that there doesn’t appear to be a good enough reason to require proof of citizenship, so they reversed the lower court’s decision and granted the injunction barring the requirement. The case as a whole still needs to be decided before a final ruling is issued, but the Court of Appeals felt that the states were not likely to win on the merit, which was one of the factors they used in making their decision.

The court acknowledged that the states have a”compelling interest” in upholding the integrity of elections. However, they said that it “is disputable … whether an injunction would actually do much, if any, harm to that interest.” The decision said that if an injunction lifting the proof of citizenship requirement led to voter fraud, that would undermine the election process, but there’s “precious little record evidence that it would do so.” The court cited Kansas’ letter requesting the requirement, which said that between 2003 and 2015, only one non-citizen attempted to register to vote using the federal form. Kansas and Arizona both tried to get the proof requirement added in 2014, even though — as the court points out — ” a tiny fraction of one percent” of their registered voters were non-citizens.

Because requirements like this would need to be deemed necessary in order to be added to the federal form, the Court of Appeals ruled against it.